Learning the detail of toilet

Toilets address a need that’s basic, human, and ordinary, and they do so with elegant simplicity. In the last century or so, minor aspects of the toilet have evolved, but the basic parts of a toilet remain the same.

it is a large bowl with a seat, or a platform with a hole, which is connected to a water system and which you use when you want to get rid of urine or faeces from your body.

Understanding the parts of a toilet is vital to diagnosing and fixing common toilet issues such as clogs, a constantly running toilet, or leaks around the tank or bowl. The toilet bowl is the large base on which the user sits. With an oblong or round hole to accept waste, most toilet bowls are made of vitreous china, a waterproof material that resists staining well.

Built into the bowl is a C-shaped internal trap that carries the waste away. The trap’s other function is to keep a small reserve of fresh water as a seal against sewer gases escaping into the home.

How to distinguish between siphon and straight flush

Siphoning is a phenomenon that relies on atmospheric pressure to make liquid flow through the siphon from a higher place, first upwards and then downwards to a lower place;
Straight flushing is to use the gravity of water to convert the impulse of water to directly flush out the dirt, as shown in the figure below.
The current toilets are basically siphon, and there are few styles of straight flushing. The siphon can suck out the dirt floating on it, and straight flushing will not work. flush it down. 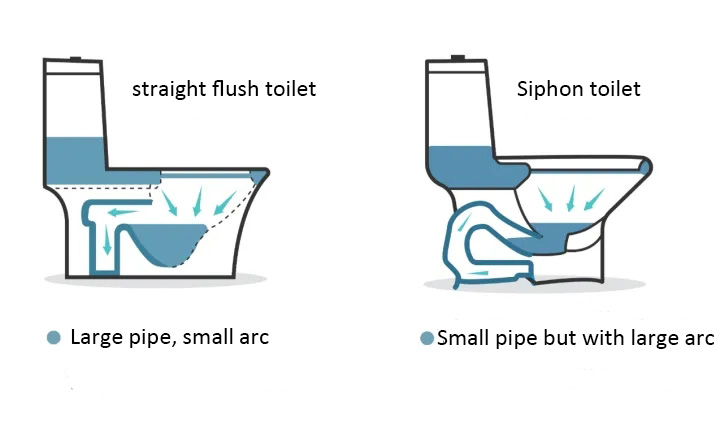 The tank o-ring seal (more commonly known as a mack washer), or tank-to-bowl gasket, is a large O-shaped rubber or wax washer or gasket that fits between the bottom of the toilet tank and the top of the toilet bowl. Its purpose is to prevent water from leaking out of the toilet tank.

When a toilet is leaking below the tank yet above the bowl, the reason is usually a poorly installed or cracked O-ring seal. The solution is to empty the tank of water, remove the tank, and replace the O-ring with a new one.

A floor flange is a round metal or plastic bracket located above the sewer pipe protruding from the floor and below the toilet bowl. The floor flange, or closet flange, is firmly attached to the floor by screws or bolts. The toilet attaches to the flange with T-bolts.

Subjected to leaking water, floor flanges can become rusty and break, leaving the toilet shaky and prone to leaks. If a toilet is leaking at the bottom, usually the cause is a broken floor flange, a poor wax seal, or both. The fix is to remove the toilet, remove and replace the flange, and set the toilet back in place.

If forget to install the flange ring during the installation process, there will be odors affecting the entire bathroom.If your home has odors that are difficult to remove, try checking the flange on the bottom of the toilet.

A wax seal is a round, cone-shaped gasket that fits between the bottom of the toilet bowl and the top of the floor flange. Its purpose is to prevent water from leaking from the toilet. Wax seals can be used only once.

If a toilet is leaking at the base, the wax seal may be cracked or insufficiently sized for the space. To fix, remove the toilet, scrape off the old wax ring and dispose of it, then replace it with a new wax ring or a silicone ring.

Toilet tanks are solid-state pieces made of porcelain. With no moving parts, they rarely malfunction. Sometimes, a toilet tank may crack or break. Hairline cracks in toilet tanks can be repaired by drying out the inside of the tank and adding silicone plumbing epoxy to the crack. 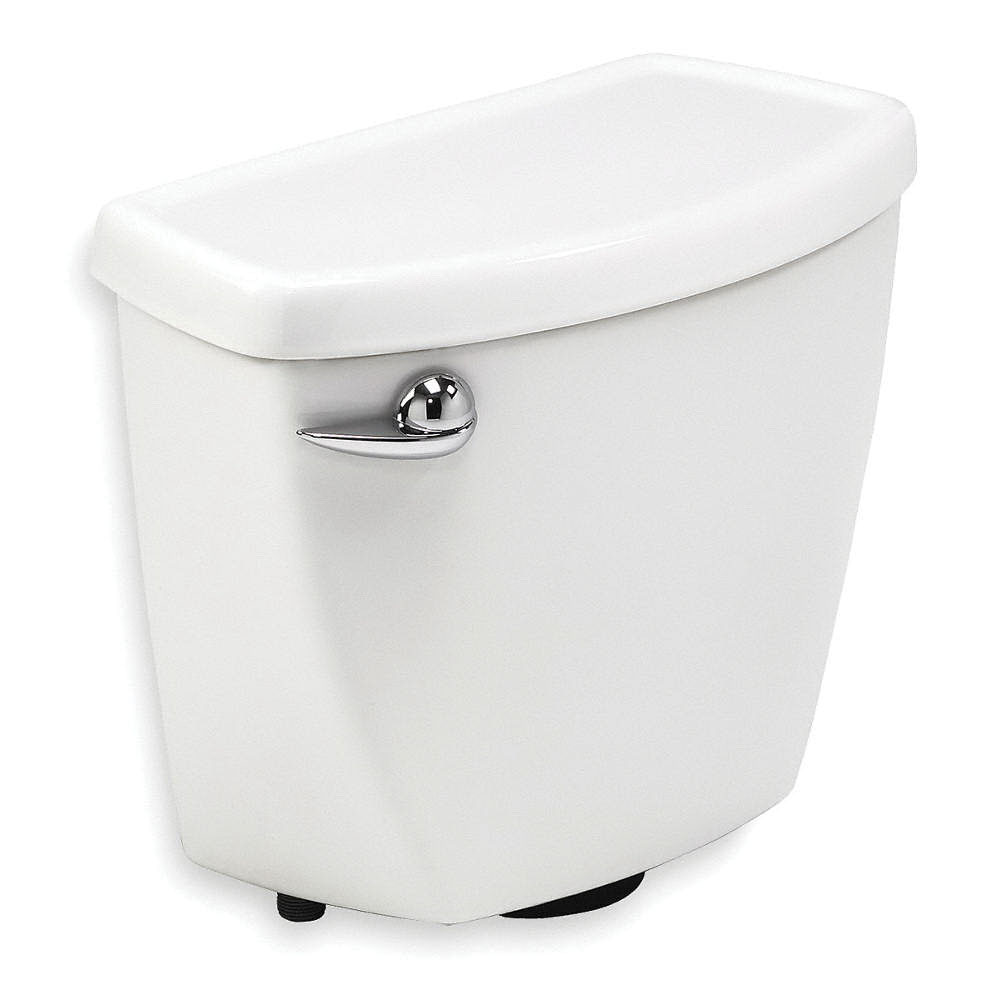 The toilet handle is the lever located on the toilet tank that is used to flush the toilet. In some cases, the handle is not a lever but a large button on the top of the toilet lid. Dual flush toilets have two buttons: one for flushing liquid waste and another for flushing solid waste.

The toilet handle is attached to a long arm that extends into the toilet tank. The end of the arm pulls the chain that releases the flapper.

It is rare for the toilet handle itself to malfunction, but the arm inside the toilet tank can bend or break from repeated use. It is possible to bend metal arms so that they are straight again. Bent or broken plastic arms must be replaced. The handle and the arm are one piece, so both must be replaced together.

When toilet floats no longer float on the tank water, the best solution is to install a new float. Symptoms that point to the need for a new toilet float: water flowing after the tank is full; tank not filling completely; or the toilet continually running.

Since toilet chains receive a lot of use, they often break. If the chain breaks off at either end, it often can be reattached using a piece of wire. Better yet, purchase a new chain. Chains come as part of a flapper repair kit or a toilet refill repair kit.

（Article reprinted from the spruce with slight modifications. If there is any infringement, delete it immediately)

Share:
PREV： What does bathroom design rely on to break the growth bottleneck?
NEXT： Sri Lanka plans to relax import restrictions on sanitary ware