“Three Children Dividend”, These Bathroom Brands Have Long Insight Into The First Opportunity

Just yesterday (May 31), the “three-child policy” – a couple can give birth to three children of the population policy was officially launched. 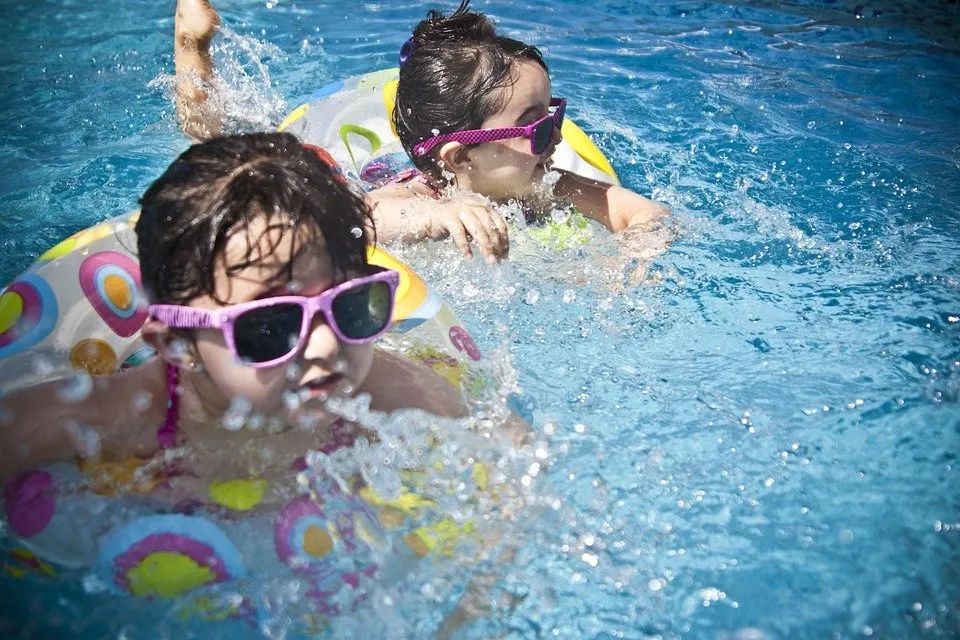 China’s total population is huge, and the aging of the population has deepened in recent years. Further optimize the fertility policy, the implementation of a couple can have three children policy and supporting measures. This is conducive to improving China’s population structure, implementing the national strategy to actively deal with population aging, and maintaining the advantages of China’s human resource endowment.

In the results of China’s seventh national census released in May, the country’s population in 2020 totaled 141.78 million. This figure represents an increase of 72.06 million people, or 5.38%, compared to 133.97 million people in 2010 (the sixth national census data). The average annual growth rate was 0.53%, down 0.04 percentage points from the annual average growth rate of 0.57% from 2000 to 2010. The data show that China’s population has maintained a low growth rate for 10 years.

Although the average growth rate of our population in the past 10 years has not decreased much compared with the data of the 6th census. But the data of recent years show that the birth rate of China’s population is declining rapidly. According to the China Statistical Yearbook, in 2017, China’s birth rate was still 12.43 per 1,000 population. This figure has fallen to 10.48 per 1,000 by 2019.

The release of the “third child” will usher in a wave of “third child dividend” if it is the same as the release of the second child. The stacking effect will boost the number of new births by 10-15% in the short term. From the East Asian experience, three or more children account for about 3% of all new births. The aging and liberalization of birth policy, children’s bathrooms, aging, smart home medical, and other fields will benefit. The continuous promotion of old reform in various places will also continue to drive up the trading volume of aging-friendly products.

In the just-concluded 2021 Shanghai International Kitchen and Bathroom Exhibition, the number of brands showing children’s bathrooms and age-appropriate bathrooms has skyrocketed. Such as Panasonic, Ying bathroom, HCG, Weideji and other very early layouts of the segmentation of the population market outside the brand, Dongpeng whole bathroom, R & T, Cncoma intelligent, and other brands and companies have entered the children’s bathroom and elderly bathroom market. According to kitchen and bathroom information, in addition to these exhibiting brands, such as Huida, Anhua bathroom, Arrow bathroom, Jomoo, Hegii and other industry heads in the business has also been involved early. Benefiting from the old reform, the old-age bathroom business in the past two years has developed very quickly, with a large increase in turnover.

This time in Shanghai, Jomoo exhibited its advanced rehabilitation series. Jomoo specializes in customizing intelligent and healthy sanitary products from the perspective of caring for women’s health and infant care. Seated showers, elevated intelligent toilets equipped with backrests and barrier-free equipment. This allows elderly consumers to shower with peace of mind. 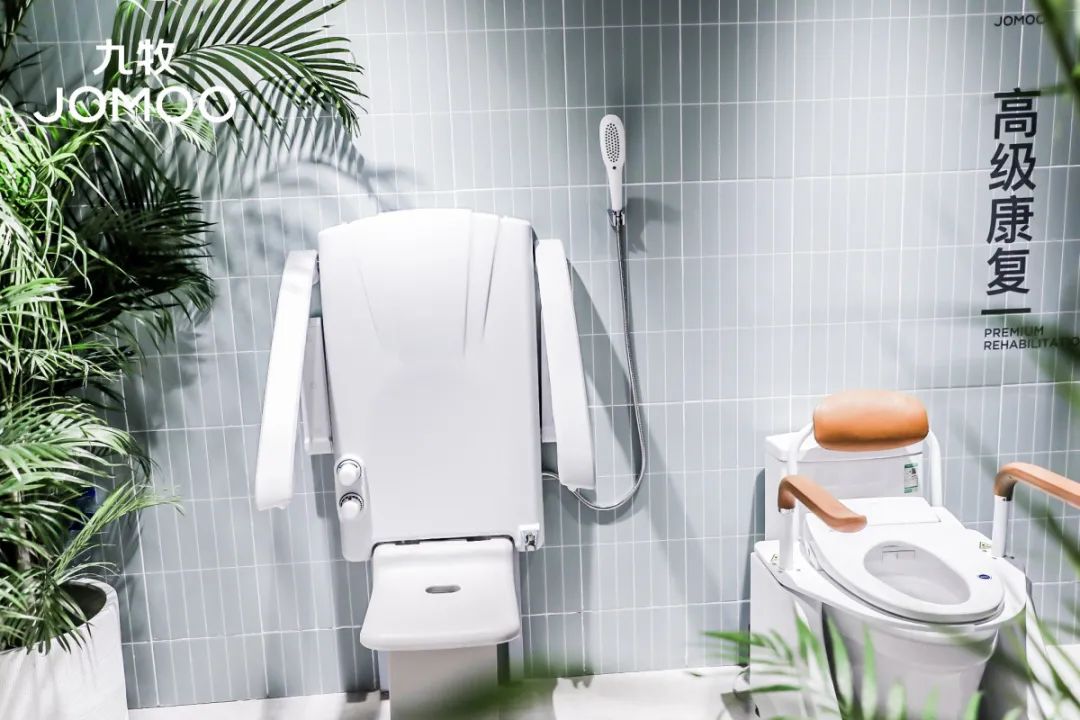 The Shanghai Kitchen & Bathroom Show, Dongpeng whole bathroom exhibited a “recreation station” of the recreation space. The space is equipped with human body sensor ground, can record the usual habits of the elderly living, action, behavior. It can also sense the elderly walking status and trajectory, found abnormalities will be notified and alarmed, always guard the safety of the family. 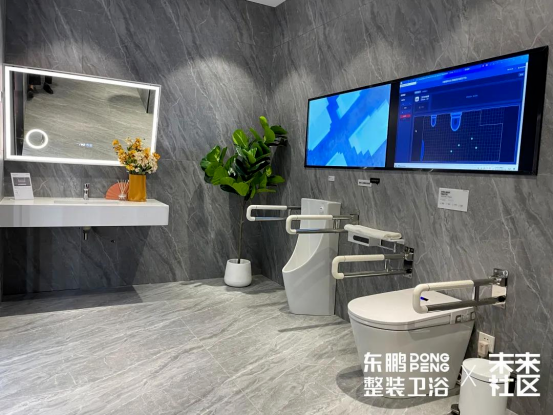 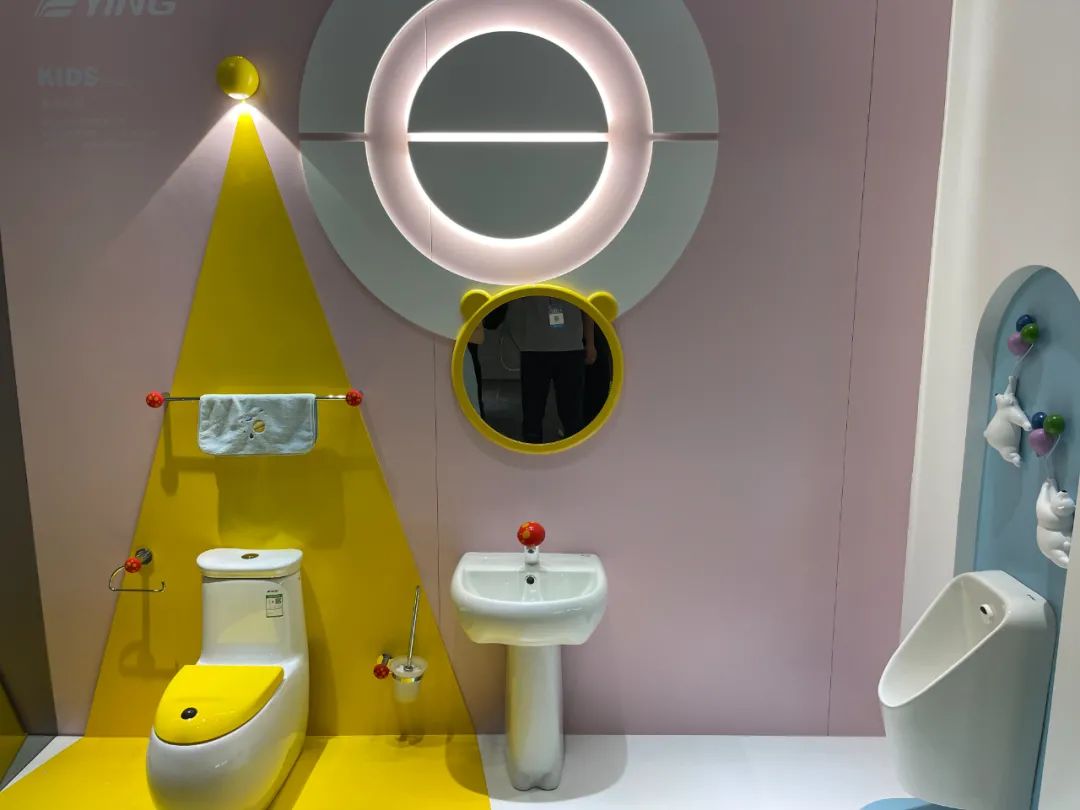 Weideji, as the pioneer of aging-friendly products in the industry, has been focusing on niche areas from the switchable bathtub suitable for the elderly, lifting intelligent toilets and its self-designed handrails and paper towel holders with alarm function. At the exhibition, Weideji launched upgraded versions of in-wall baby seats, nursing tables and various other mother and baby equipment suitable for installation in public places. 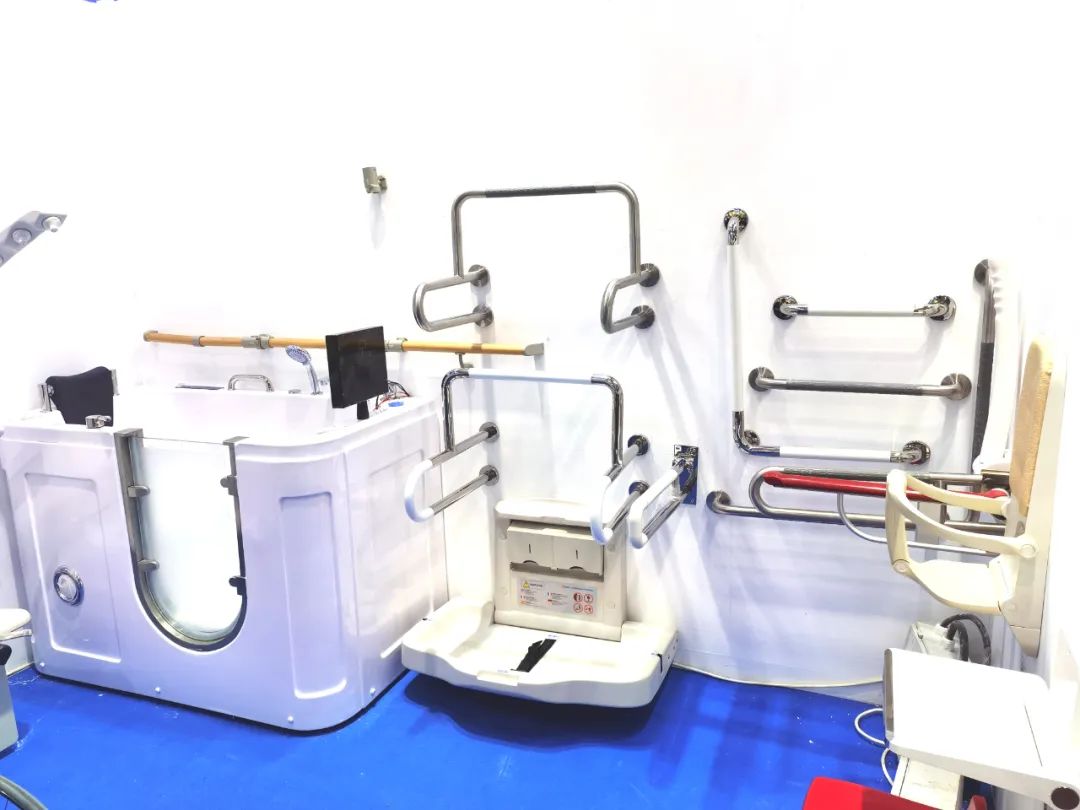 R&T has been pushing the boundaries in the last two years. In addition to the original cover business, R&T launched the smart toilet, while the independent brand “water love” in 2021 into the e-commerce channel. The exhibition, R & T also launched a series of elderly-friendly products. The lifting intelligent toilet with armrests is equipped with a stretchable operating interface. The liftable basin can be adjusted according to the needs of different people. 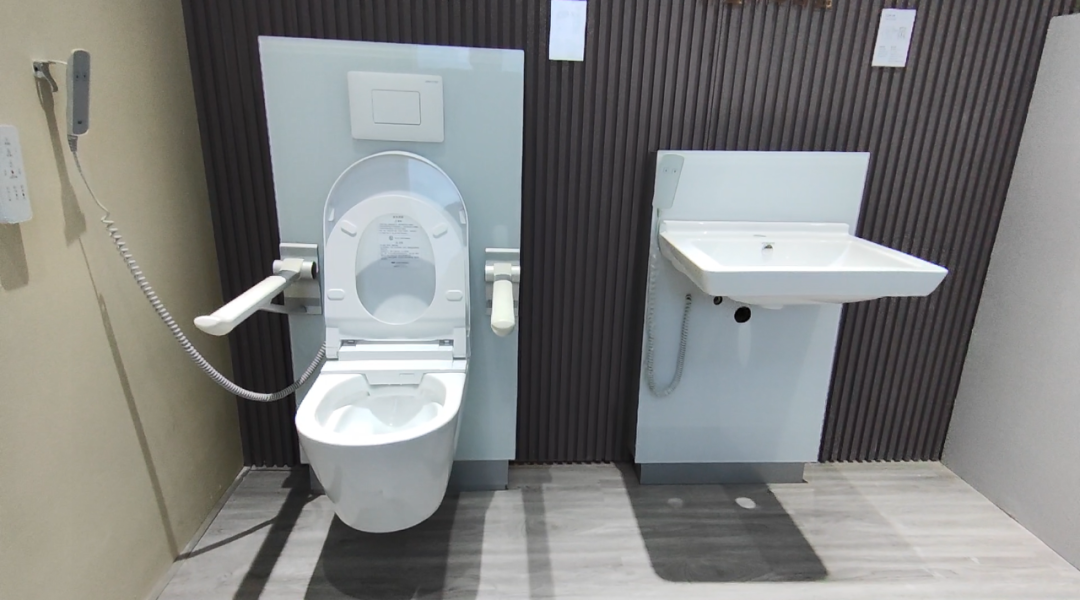 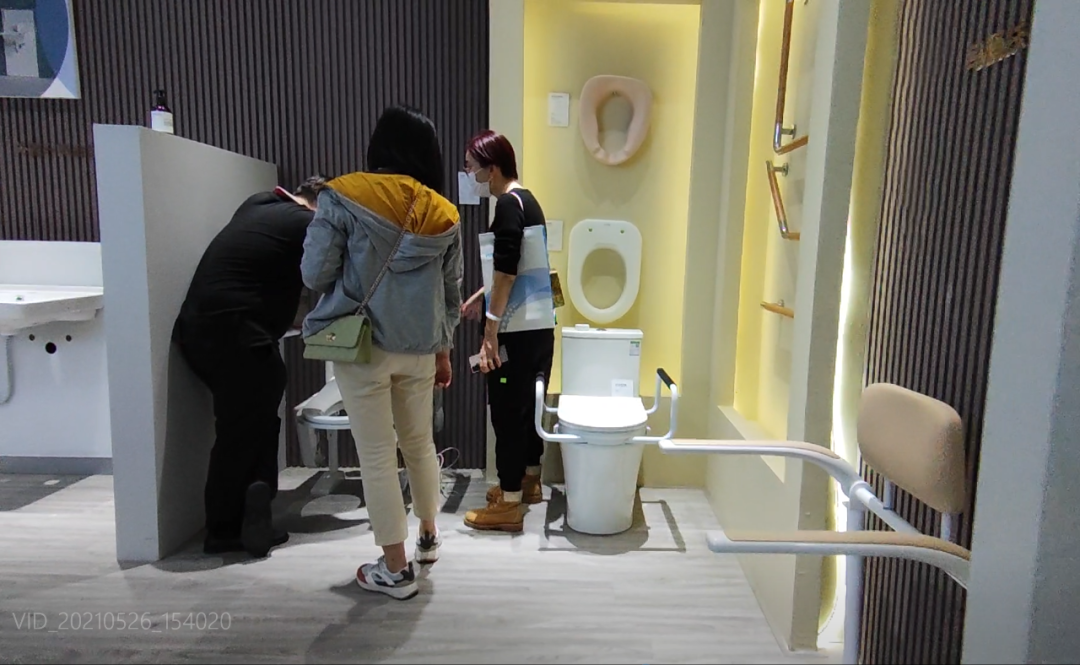 Cncoma intelligent this exhibition of the Parkes series of filial machines, equipped with a load capacity of 120KG. 90-degree flip toilet armrest, suitable for the elderly. In addition to this, it is reported that Cncoma is also studying the urine test, stool test, blood pressure test, and other tests through the intelligent toilet this platform to achieve. 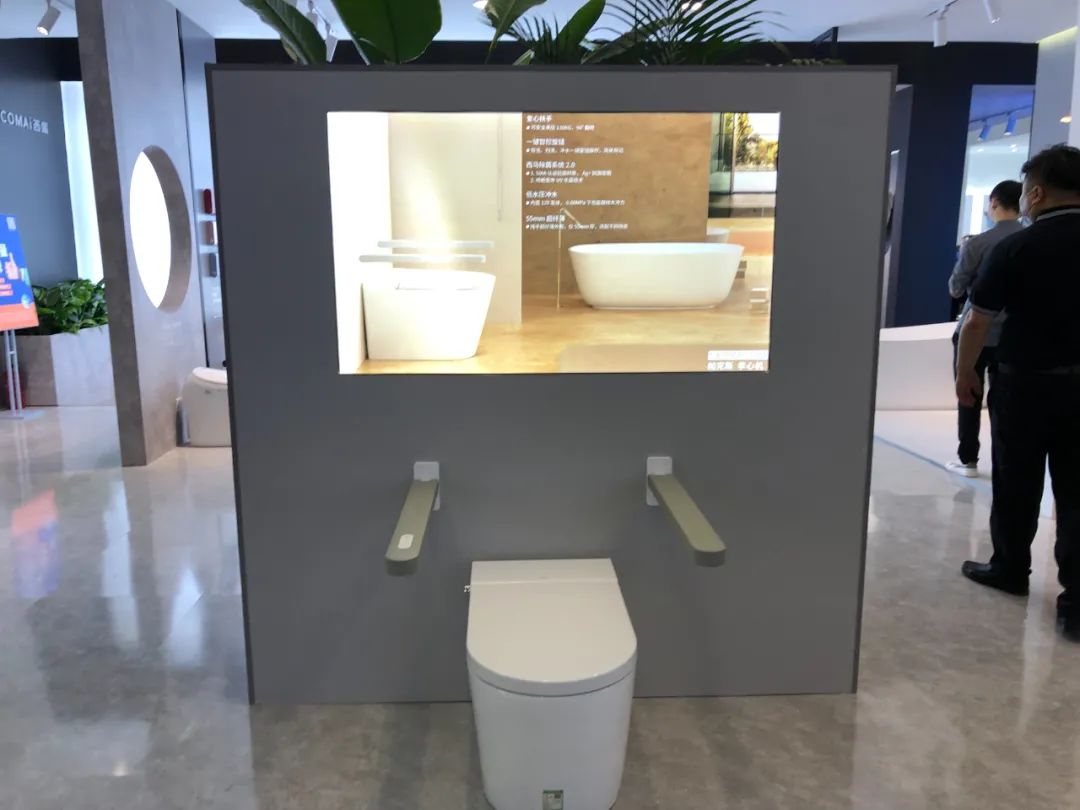 HCG is a pioneer in the field of aging-friendly, mother and child bathroom products. Its layout in this field is relatively complete. It is reported that 2021 is the 90th anniversary of HCG, the brand will be based on rejuvenation, from medical, health, aging, mother and child field, public toilet equipment, barrier-free equipment field continued to conquer the new blue sea, towards a century enterprise. 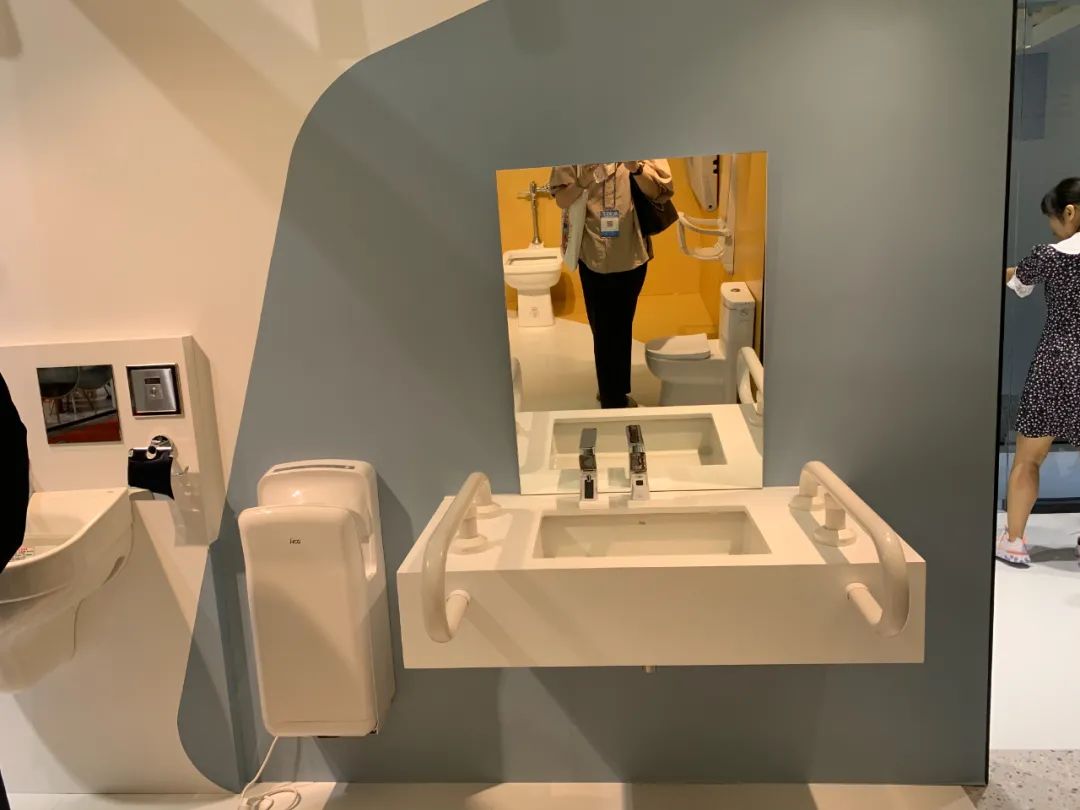 Inax showcased a seated shower, which can be easily bathed while sitting on a chair. It can effectively prevent falls due to slippery floors and reduce the workload of caregivers. At the same time, the product can also freely adjust the angle of the shower arm and the water jet as needed. You can take a shower sitting down or standing up. You can choose whatever you want to achieve the best showering experience. 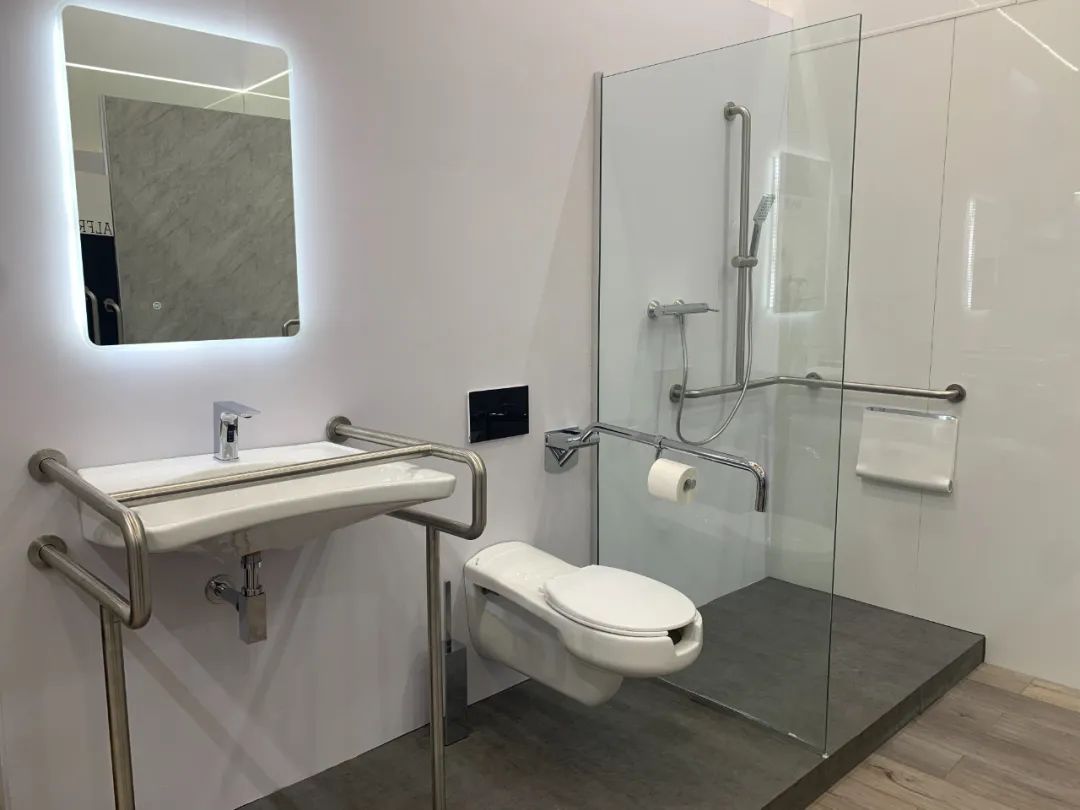 In addition to the above brands, kitchen and bathroom information also noted that the new exhibitors in the UK Victoria exhibited products mainly stainless steel bathroom grab bars.