A product cannot be created without its designer. However, in people’s talk, the performance, quality and price of the product are the focus, while the designer of the product is forgotten. But it is often the twinkle in the mind of these designers that creates a product that is talked about so much. A great product is usually a blend of art and design, experience and inspiration. Today we’ll take a look at some of the world’s most famous designers and their masterpieces.

Iraqi-British architect, winner of the Pritzker Architecture Prize in 2004, was named one of the 100 most influential people in the world by TIME magazine in 2010, ranking first in the “Ideas” category. Her designs have always been known for their bold shapes, and he has been called the “master of deconstructionism” in architecture. Her representative works include the 170-meter glass tower in Milan, the skyscrapers in Montpellier and the DANCING TOWERS in Dubai, the Guangzhou Grand Theatre, the Galaxy SOHO complex in Beijing and the Daxing International Airport in Beijing. 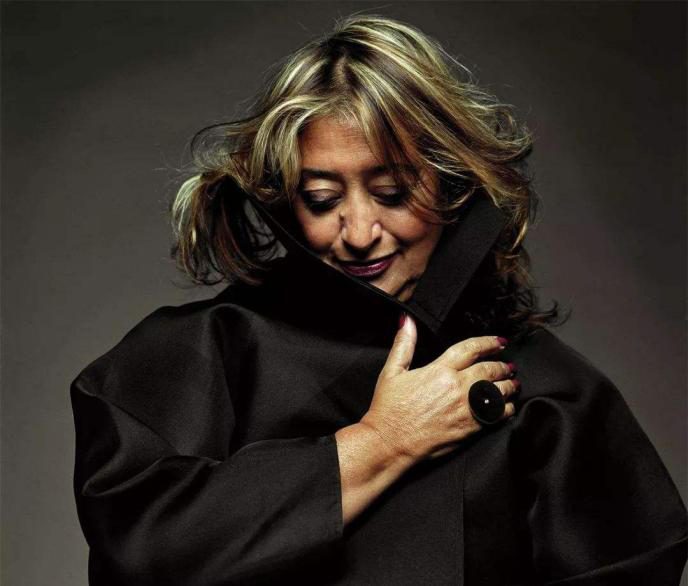 Zaha has worked with Bravat, a premium brand under the German brand DIETSCHE, to create a faucet that is flowing, artistic, and at the same time perfectly capable of providing healthy drinking water. 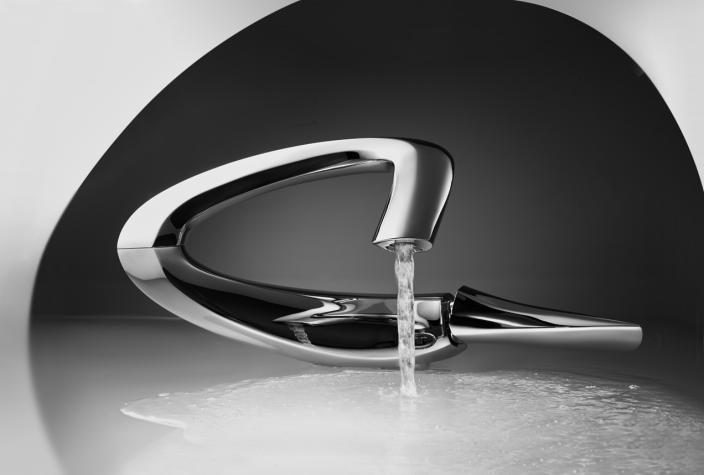 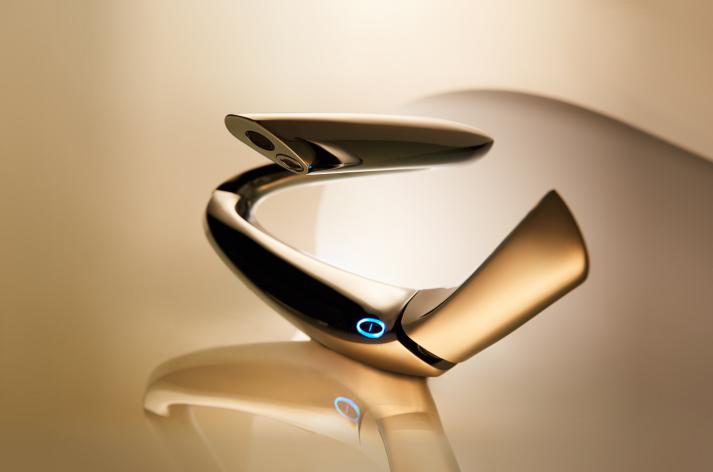 Zaha Hadid explained the design of the faucet: “It is inspired by the beauty of the movement of water. The fluidity of the faucet expresses the tension and amazement of a liquid that instantly solidifies. In addition, the core strength of the design language of this faucet’s exterior is that it looks like it not only has continuity but also ergonomics”

Born in Berlin, he has been called “the Leonardo da Vinci of the 21st century”. His works include the U.S. space shuttle, the world’s first monocoque sports car BMW 700, the Ferrari Testa d’ro, the Canon T90 camera, and the Shanghai Chongming Island Eco-Technology City, etc. In 1975, he joined Villeroy & Boch, where he developed the idea of the whole bathroom and practiced whole living spaces. 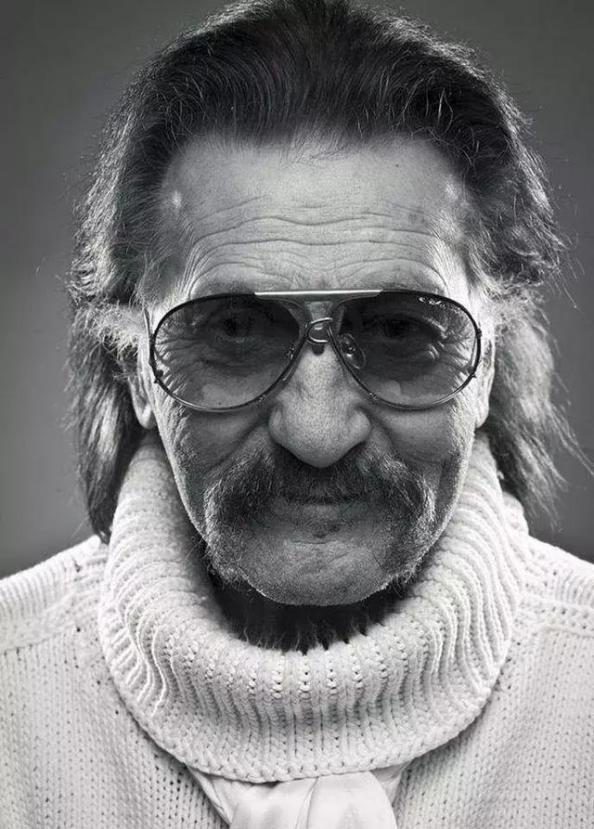 In 1975, he joined Villeroy & Boch, where he introduced the concept of the bathroom and the living space, helping to usher in a new era in the history of Villeroy & Boch. Klani once said, “90% of my design comes from nature, 10% is Klani.” 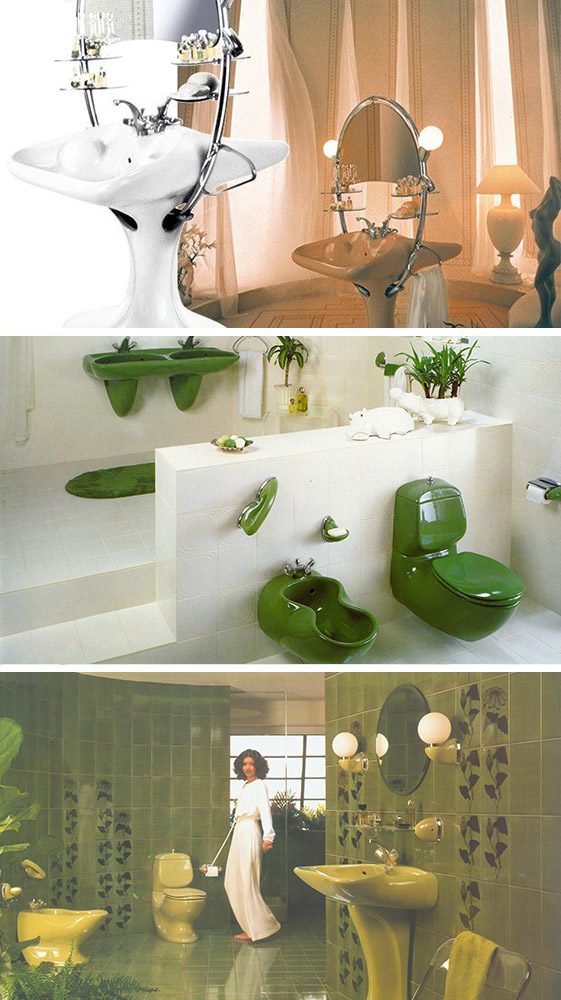 Born in Milan, Italy, Giorgio Armani is a famous Italian fashion designer and founder of the world famous luxury brand Giorgio Armani. As an irreplaceable presence in the international fashion design industry, Giorgio Armani defines an era in haute couture, home furnishing, hotels, luxury apartments, bars, cafes and other fields, Armani is not just a luxury LOGO, but a set of design aesthetics, an all-embracing fashion empire. 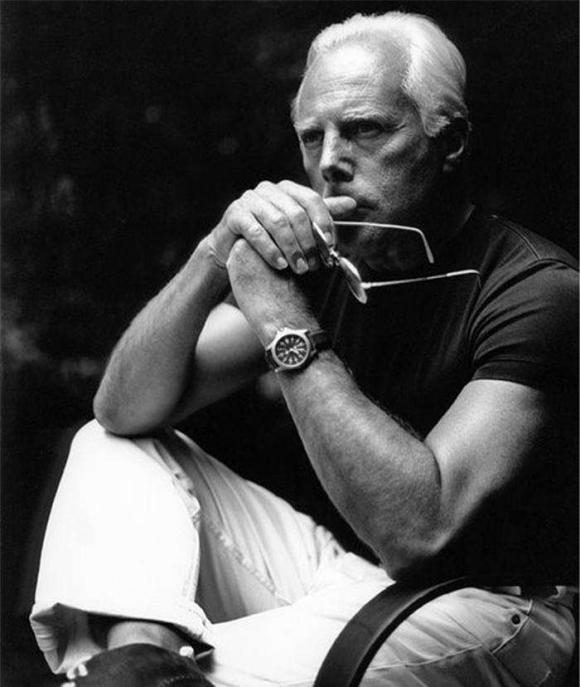 In 2011, Giorgio Armani Roca, a strong production of Armani, Roca series bathroom. The series of works will be a perfect combination of fashionable artistic design and intelligent comfort, both artistic beauty and practical needs, can be called a classic crossover between fashion and bathroom. 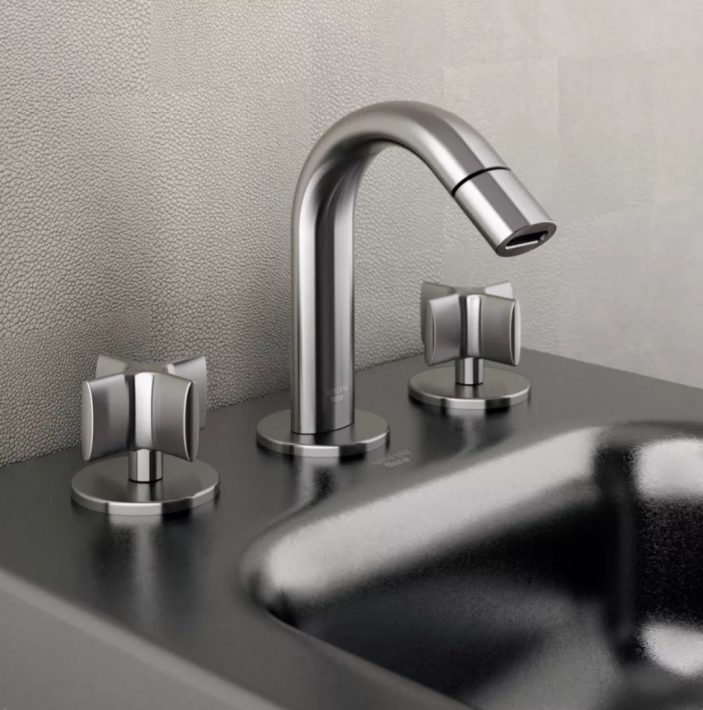 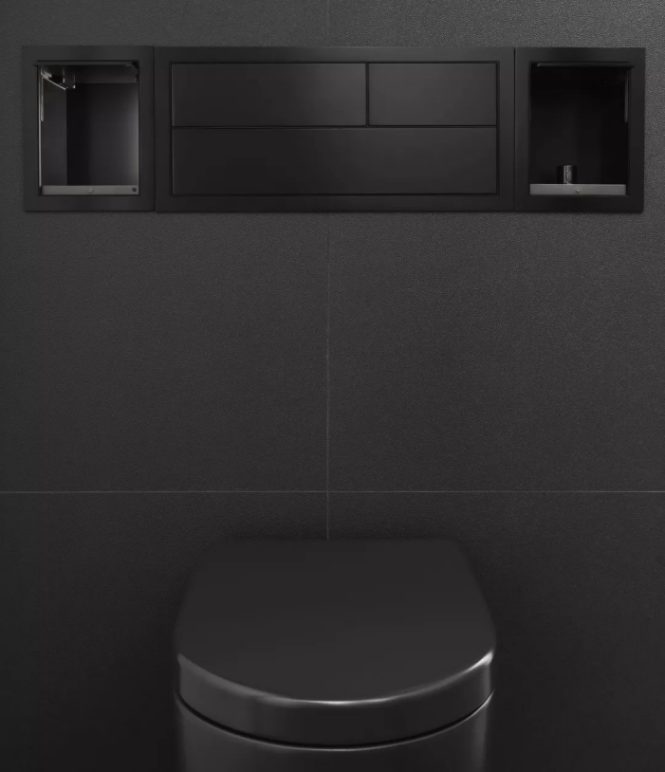 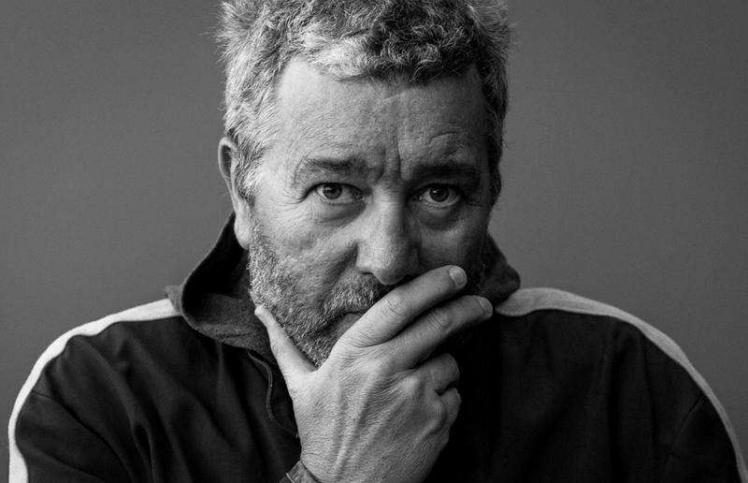 Inspired by the beauty of the “whirlpool” of water, the AxorStark V collection overturns the traditional metallic faucet in favour of clear crystal glass, with the water rising and then descending to reveal the beauty of the natural gushing water. 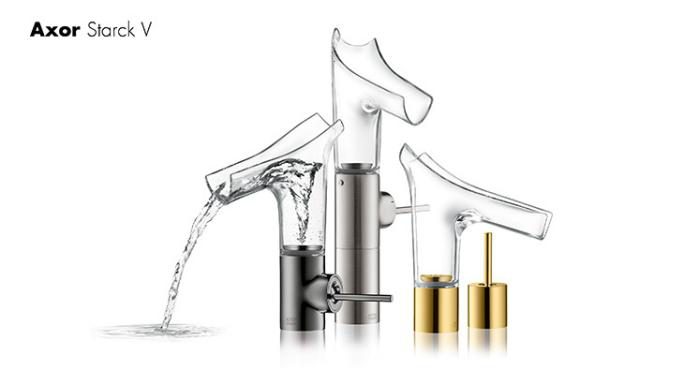 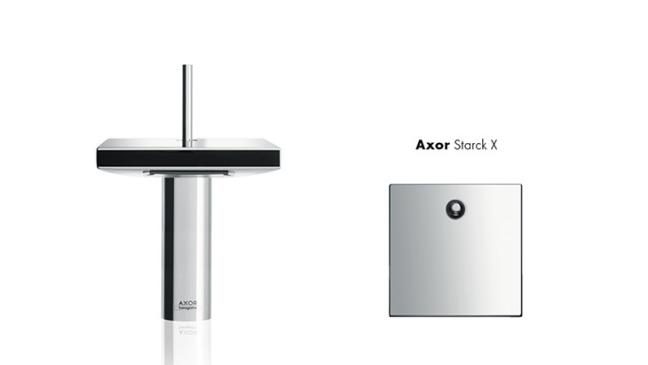 Philippe Starck once said, “Design rejects all rules and paradigms, the essence is to go beyond and explore.” The AxorStark V collection is a creative break from the traditional metallic faucet and brings the faucet back to the water itself, ideally uniting the practicality and beauty of the faucet.

Born in Toulouse, France, Jean-Marie Massaud was selected by Wallpaper as one of the “100 most influential designers in the world”. Jean-Marie Massaud draws inspiration from volcanoes, clouds, waterfalls and other natural scenes to the extreme, and is represented by the Estadio Omnilife, the “Volcano” stadium in Mexico, the Toyota Me. We concept car, the Truffle recliner and the Sky Concept Hotel. Manned, etc. 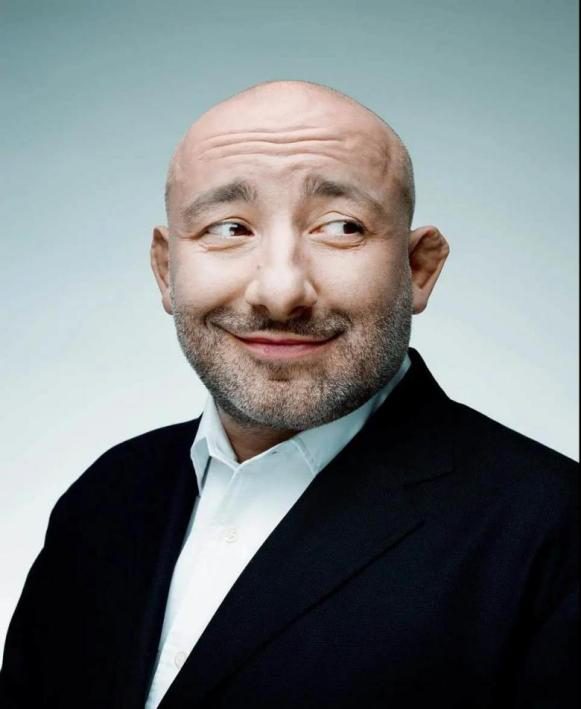 Unlike mass-produced products with prominent die-cast and polished textures, the AXOR EdgeAxor Edge series, created by Jean-Marie Masson, aims to create a faucet piece with a sense of artistic sculpture. Aesthetically, the AXOR EdgeAxor collection draws on the cubic architectural aesthetic of the early 20th century avant-garde in its artistic creations. 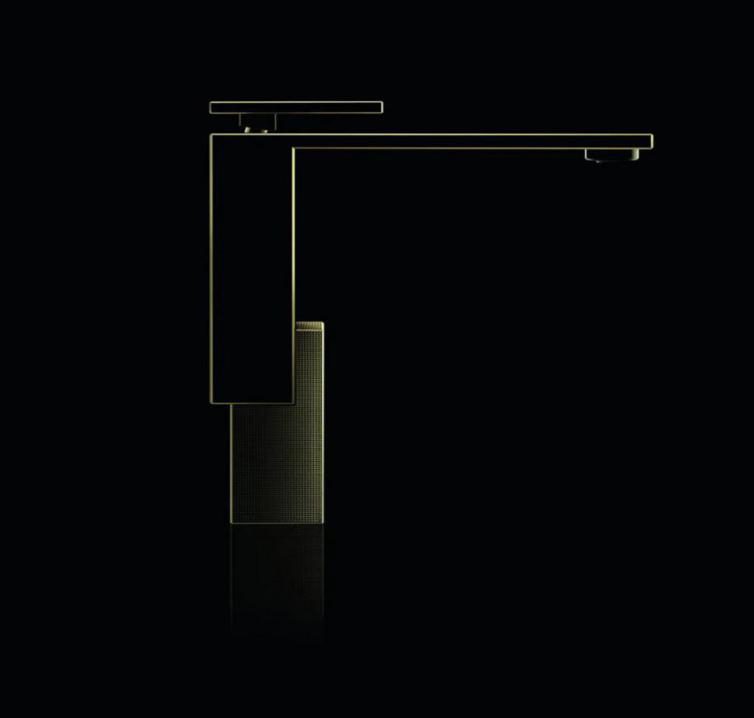 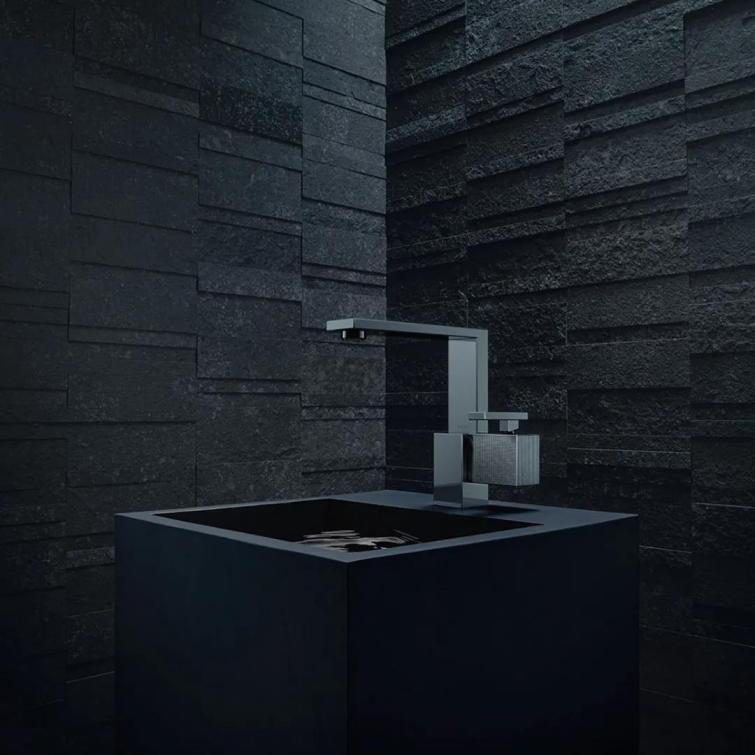 Born in Spain, she studied under the legendary Italian designer Achille Castiglioni, who has been dubbed by the Western media as “the future of Italian design”. The feminine elements in her work, the collision of diverse colors, always captures the subtlety diluted by everyday triviality. 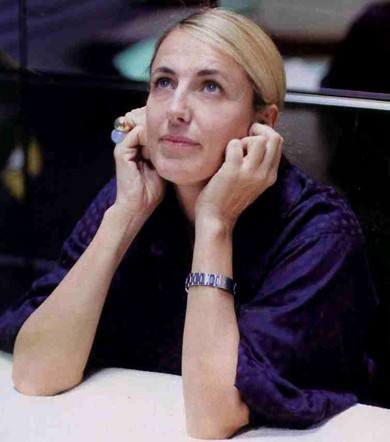 The Sonar collection, created for Laufen by Patricia Urquiola, leads the way into the era of thin-sided basins, featuring a blue-diamond ceramic material, one of the main ingredients is sapphire. Compared to conventional ceramics, the Blue Diamond ceramic thin-sided basin has a thin wall of only 3-5 mm, an edge radius of only 1-2 mm and an average flexural strength of more than 120 kp/mm², which is comparable to that of steel. 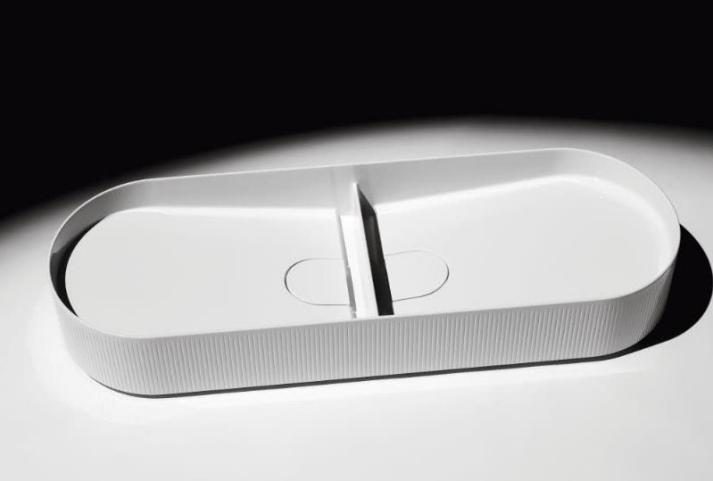 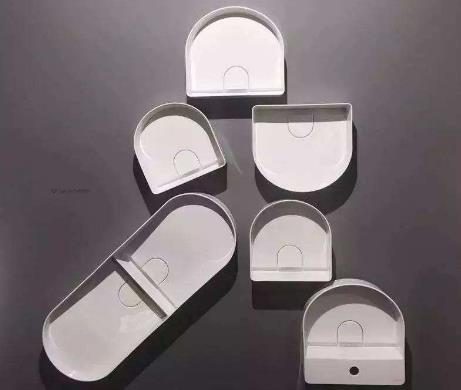 “I want to inject my own soul into each project,” So says Patricia Ochira. With the Sonar collection, a “bathroom universe” of blue-diamond ceramics is born.

Italian “national treasure” designer, graduated from the Politecnico di Milano in 1959, majoring in architecture. After graduation, Bellini worked as an architect and industrial designer in Milan, winning the Golden Compass Award, which is known as the “Nobel Prize in Design”, eight times. In addition, Mario Bellini was the first person in the world to design a portable computer. 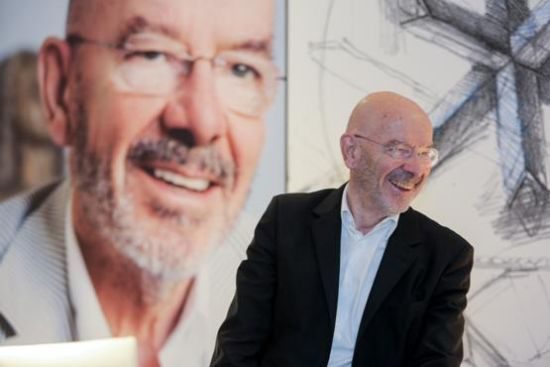 The swan-shaped faucet, designed by Mario Bellini for Lufthansa, reproduces the shape of a swan with its unpredictable and smooth curves, restoring its physical beauty and giving people a lot of imagination. But don’t look at it as it looks very abstract, the price of such a small “swan” is about 80,000 RMB. 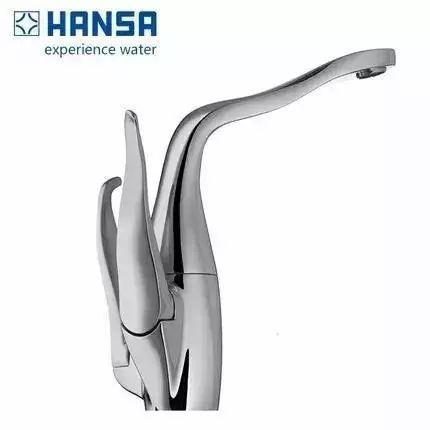 Born in Yamanashi Prefecture, Japan, he is currently the fifth director of the Japan Folk Art Museum and was awarded the title of Royal Industrial Designer by the Royal Society of Arts. From 1996 to 2013, Naoto Fukasawa established IDEO Tokyo Studio, NAOTO FUKASAWA DESIGN and Super Normal. 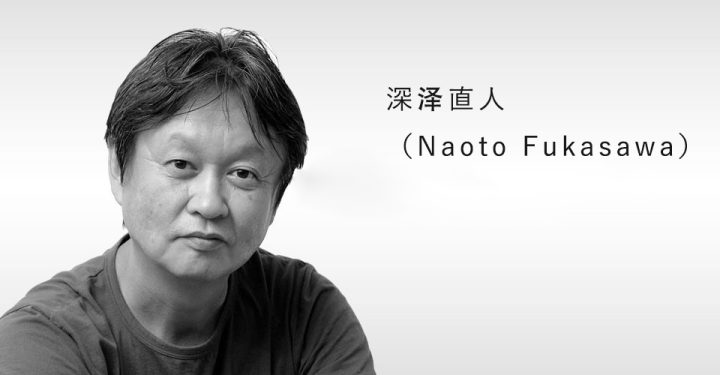 The “equal” series of faucets launched by Naoto Fukasawa in collaboration with KVK is a series of faucets that use the lines of the body, and the oval icons for the handle, spout, and shower, implying the power of silence. The intuitive art design concept of simplicity is continuously extended through the figurative expression of design. 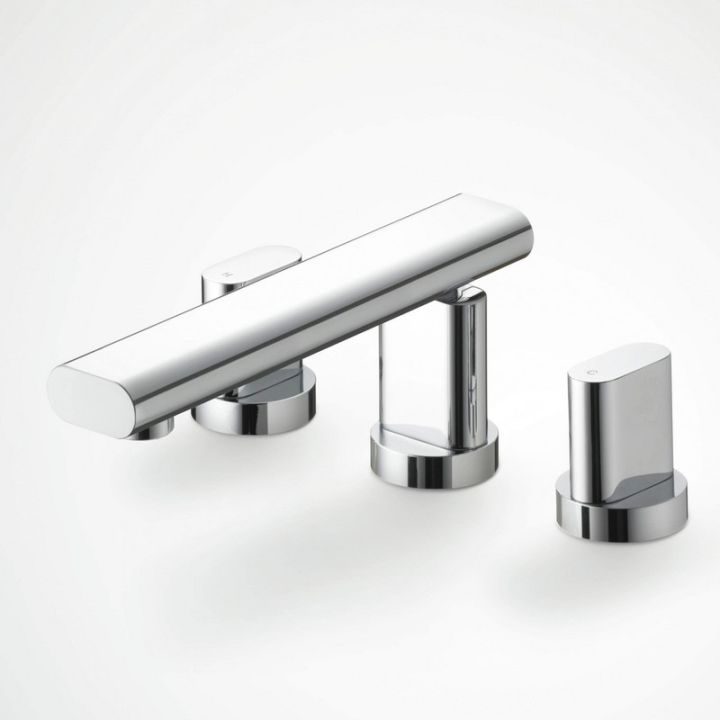 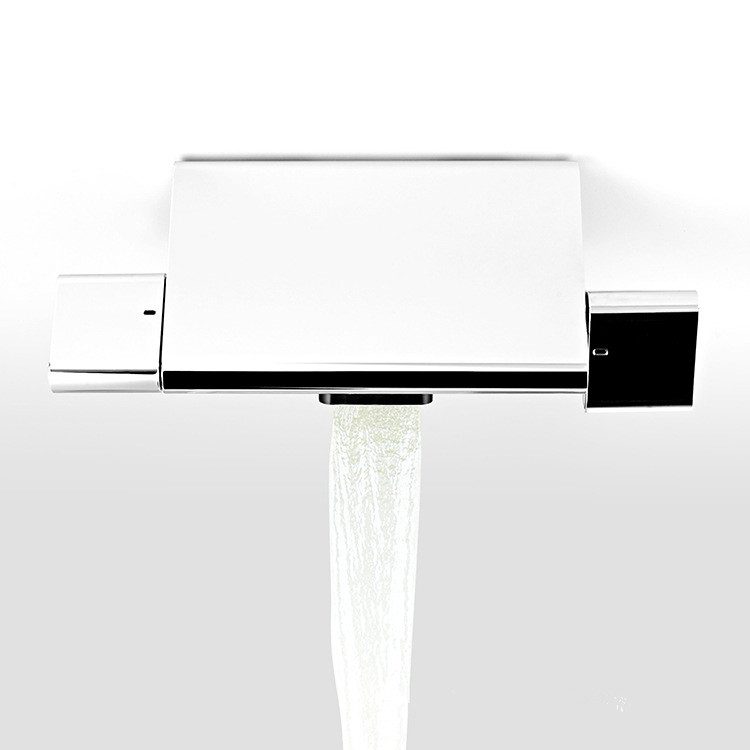 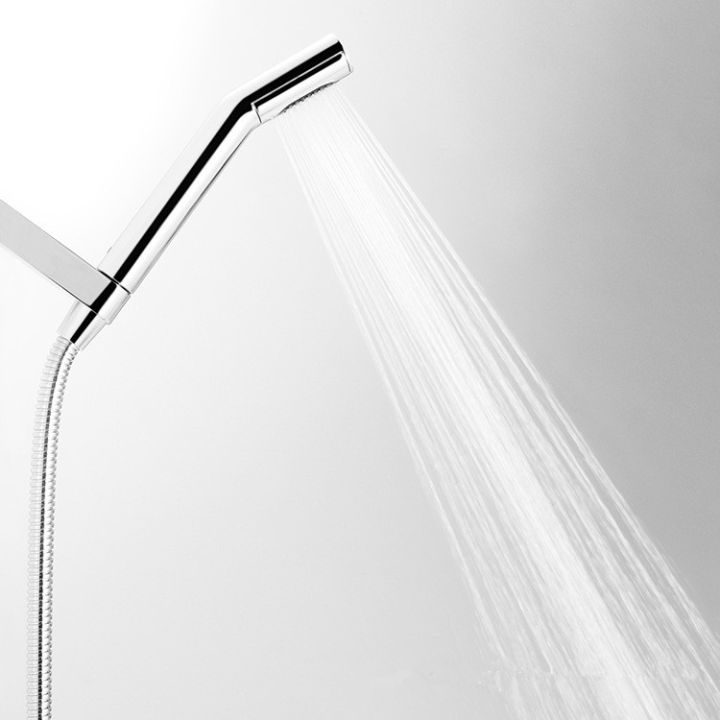 Born in Hong Kong, Leung Chi Tin Design Group Limited, an internationally renowned architectural and interior designer, was listed on the Main Board of the Hong Kong Stock Exchange in 2018. Leung Chee Tin Design Group Ltd. has topped the residential category for four times in the list of the world’s top 100 interior design firms by Interior Design Magazine, a leading American magazine. His representative projects include The Hampton, Yoo Residence and One Shenzhen Bay in Hong Kong. 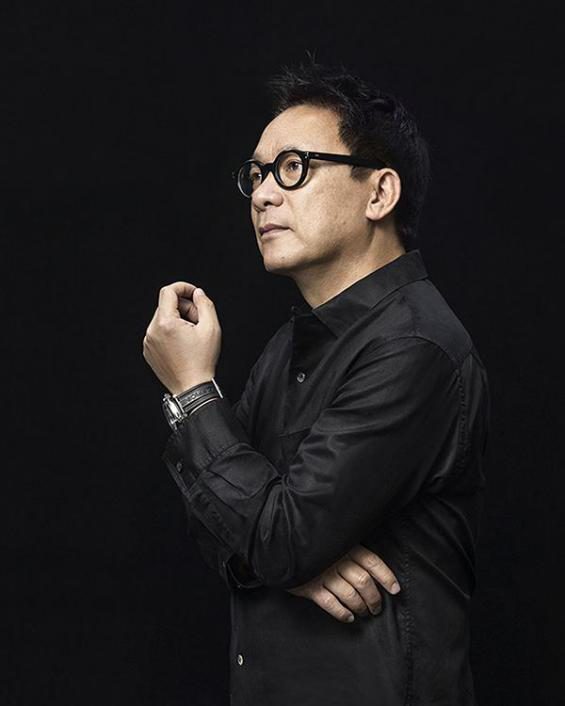 The Villeroy & Boch Crystals Edition | Crystal Collection, a collaboration between Villeroy & Boch of Germany and Leung Chee-Tin, is a collection of crystal-clear Austrian Swarovski crystals that combines outstanding design, high-end quality and unique personality to present a dazzling visual effect and extraordinary texture. 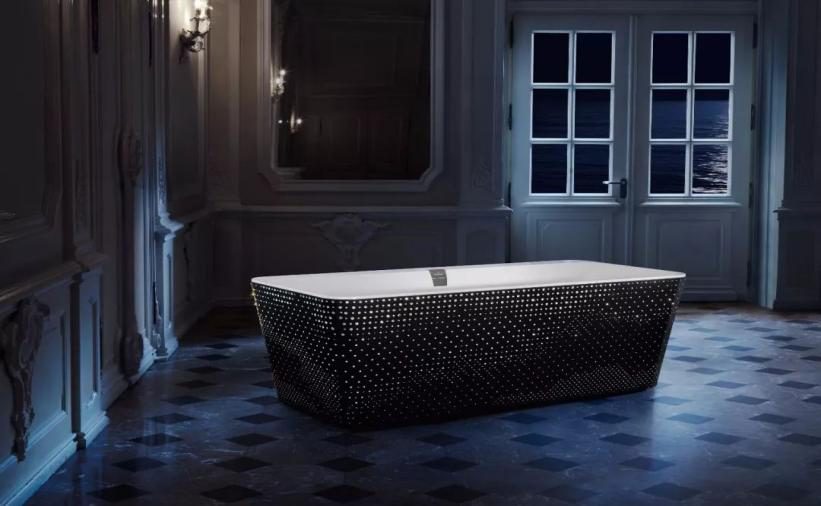 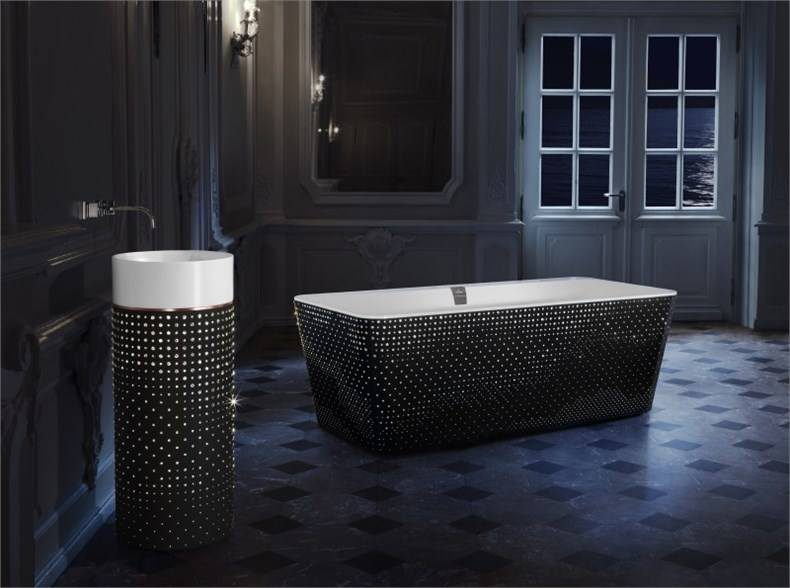 A graduate of the Bauhaus University, she was listed at the top of WALLPAPER magazine’s 200 Most Design Influential Designers list in 2015. Starting in 2019, she has opened studios in Denmark, Paris and New York, and Gesa Hansen’s work has twice won the Red Dot Design Award and the Good Design Award. 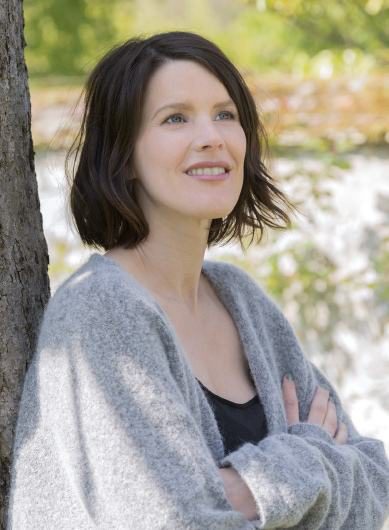 The His & Hers bathroom concept collection continues Villeroy & Boch’s reflections on colour and the modern lifestyle of young people, in which Gesa Hansen uses colour as a medium to give men and women different qualities and charms. 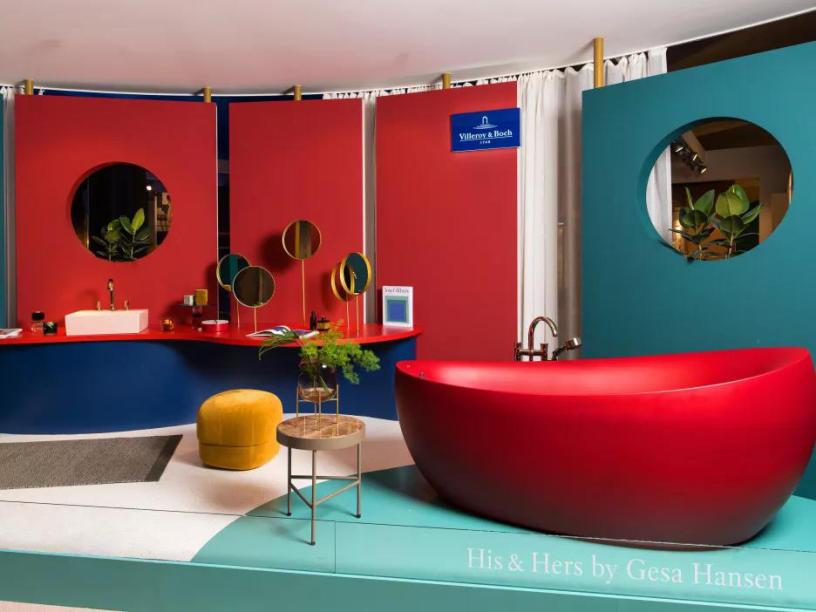 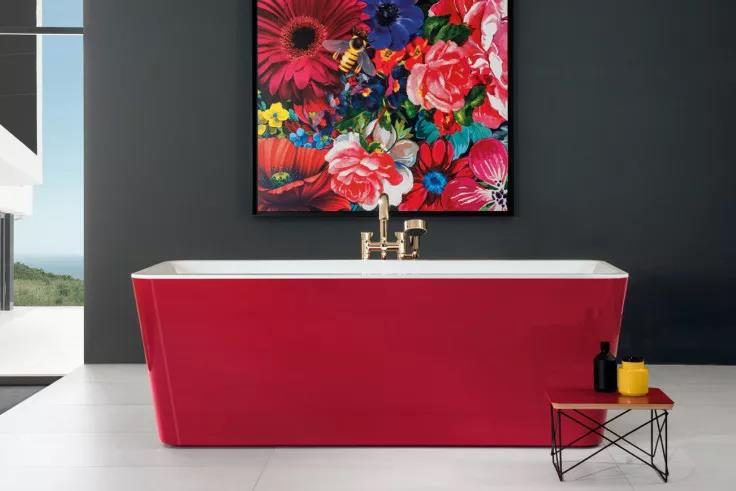 The “Hers” space is dominated by a feminine palette of green and crimson, while the “His” space features a coral wash basin and a dark green toilet, creating a visual contrast between the two.

Share:
PREV： Foreign Corporate Profits Fell Across The Board, Up To -125%
NEXT： Who Had The Audacity To Move The Forest Into The Bathroom! But I Like~~~