In March, the bathroom industry again exposed two cases of corporate mergers and acquisitions. Local time on March 5, the British Hartford Holding Group (Hartford Holding) announced that it had completed the acquisition of the British bathroom company Traymate on February 26, the latter is a company specializing in the production and sale of shower chassis. According to foreign media news on March 1, FM Mattsson Mora Group has completed the acquisition of British bathroom brands Aqualla and Adamsez brand on February 26, the transaction amount is not yet disclosed. It is understood that Aqualla is located in Northern Ireland and currently employs 37 people. In 2020, sales were £7.6 million (about RMB 69 million), an increase of more than 30% over the previous year. Aqualla acquired the Adamsez brand in June 2020. The latter has a history dating back to 1880 and is known for producing luxury bathtubs.

Shandong Provincial Market Supervision Bureau website on February 1 released the results of the 2020 provincial supervision and sampling of ceramic squatting / toilet product quality. The total sampling of the province’s 19 enterprises production / sales of 20 batches of ceramic squat / toilet products. Among them, the production of 2 enterprises 3 batches, 17 enterprises 17 batches in the field of circulation. Among them, 2 batches of products do not meet the requirements of the relevant standards, failed items for the wash function, toilet water consumption, toilet water efficiency level project. Failure list is as follows.

According to preliminary data from the Spanish Tile Manufacturers Association: the total turnover of the tile industry in 2020 is basically flat with 3.757 billion euros (about 29.299 billion yuan) in 2019, the year-on-year increase or decrease between -1% and 2%, export revenue is expected to grow by 1% to 4%, accounting for 75% of the industry’s turnover, domestic sales are expected to decline by 4% to 7%, which is weaker and failed to return to normal sales levels and a 3-4% drop in tile production (510 million m2 in 2019), which allows companies in the Castellón production area to reach a balance between supply and demand and significantly deplete inventories. As for export markets, Spain’s exports to the United States surged by 15.1% from January to October 2020, making the United States the largest export market for Spain. France, the second largest market, grew by 1.8%. Spain’s exports to the United Kingdom tile volume fell, down 9.8 percent.

Bolina Sanitary Ware will carry out internal asset integration to further enhance profitability and sustainable business development, and plan to enter the A-share capital market in three to five years.

Bolina Holdings exited from the Hong Kong stock capital market this time, operating the main business and the capital market separately, aiming to focus on the development of Bolina Sanitary Ware’s main business, which is more conducive to enhancing the efficiency of the entity’s operation. It concentrates on the two major markets, domestic and foreign, to achieve a more benign operation and faster development, which is of great and positive significance to the future development of Bolina Sanitary Ware.

Recently, Red Star Macalline Decoration Industry Group announced at the 2021 Target Responsibility Reporting Conference that the annual contract volume in 2020 has exceeded 4.5 billion against the trend. The national home improvement stores exceeded 214, with 6 large orders over 10 million, 126 large orders over one million, and the highest customer order value of 54 million. The contract value of a single promotion in October exceeded 178 million, setting a new historical record. 2021’s target is to challenge 8 billion contracts and 3 billion revenue, to build an ecological organization, and to work collaboratively.

In February, the overall supply and demand of commercial properties in Guangzhou was relatively quiet. Compared with the same month last year, the turnover of office buildings and stores both dropped significantly, but the turnover of apartments rose sharply, by more than 400%. During the month, the volume of apartment transactions in Guangzhou was 51,359 square meters, down 49% compared to January, but up 474% compared to last year. The proportion of year-on-year rise is quite large mainly due to the epidemic factor last year, but if compared with the same period in 2019, there is also a small increase of about 5%.

From the perspective of major cities, Hainan, Beijing, Guangdong refined penetration rate of more than 50%, located in the top three. Zhejiang, Jiangsu, Sichuan, Henan and a number of provinces and cities refined installation penetration rate is still lower than the regional government issued a full renovation target ratio.

Table: China’s provinces and municipalities in 2020, the penetration rate of hardcover and hardcover policy provisions target

According to the database of China Business Industry Research Institute, the export volume of Chinese ceramic products in January-February 2021 was 2.689 million tons, an increase of 21% year-on-year. 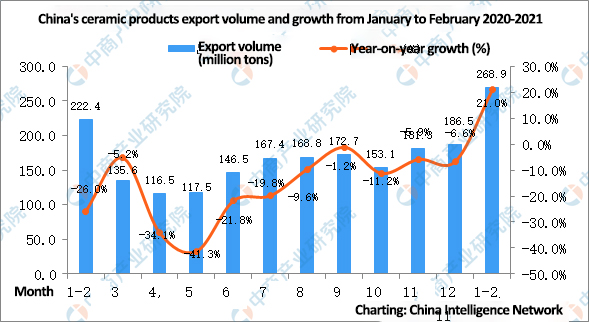 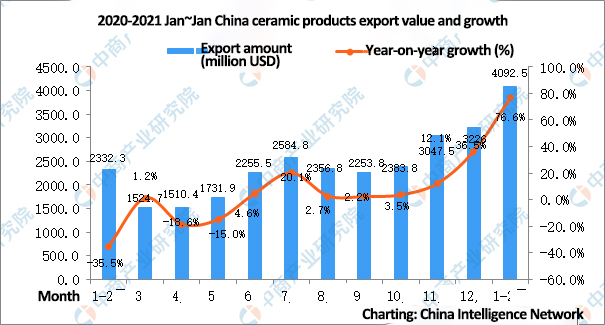