700+ Brands On Stage, Hundreds Of Thousands Of People In Focus, What Makes TA Shine “Window Of The World”? 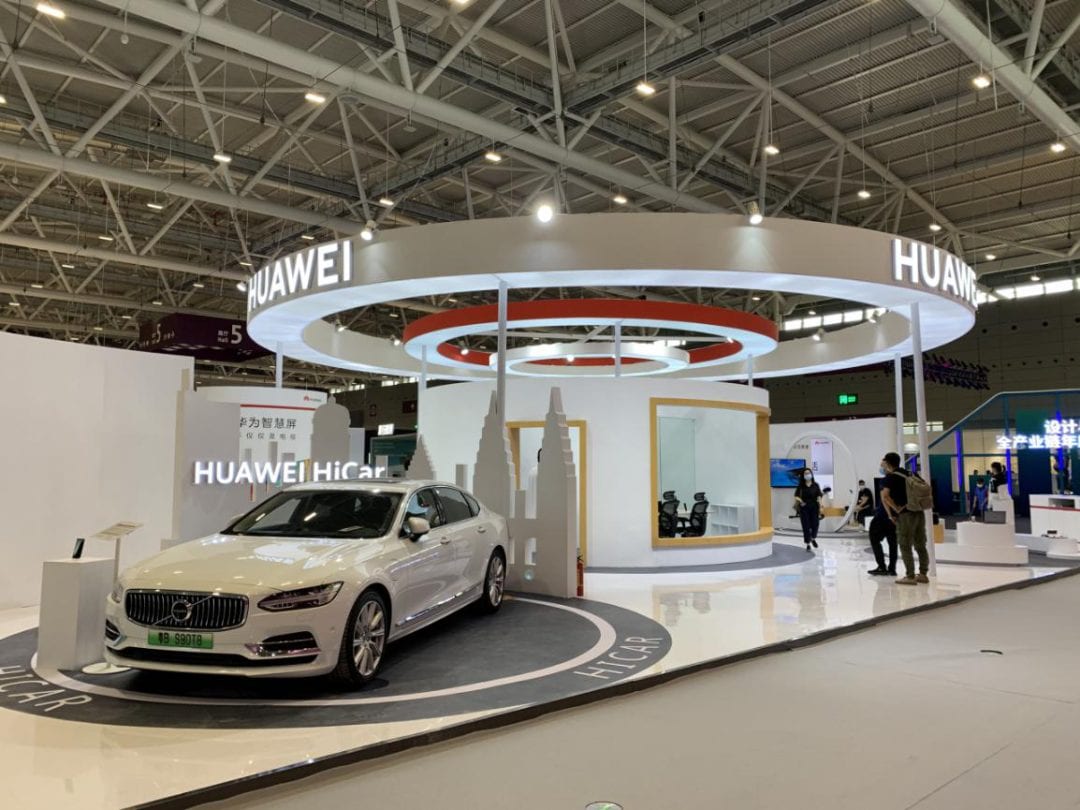 In Hall 1, the Shenzhen International Finished Housing Exhibition was held simultaneously as an exhibition-within-an-exhibition, with Bravat, which has been developing rapidly in the field of interior industrialization in recent years, occupying the “C” position. The product areas were so crowded that they could be described as “jam-packed”. Behind the huge popularity, what cards did Bravat play? What are the surprises for partners and consumers?

A Wide Range Of Products Shine “Window Of The World”.

As usual, the most interesting part of the show is the products. This year, Bravat brought five series of products to Shenzhen Furniture Fair, including household installation, bathroom assembly, kitchen assembly, touch-free new home and magic wall plumbing system, providing a very diversified home experience and forming a huge crowd gathering effect at the scene. 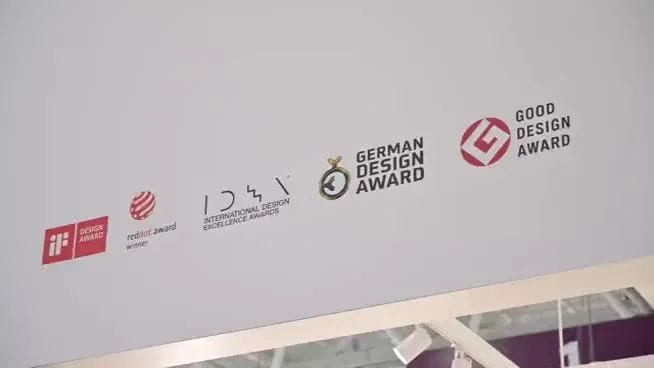 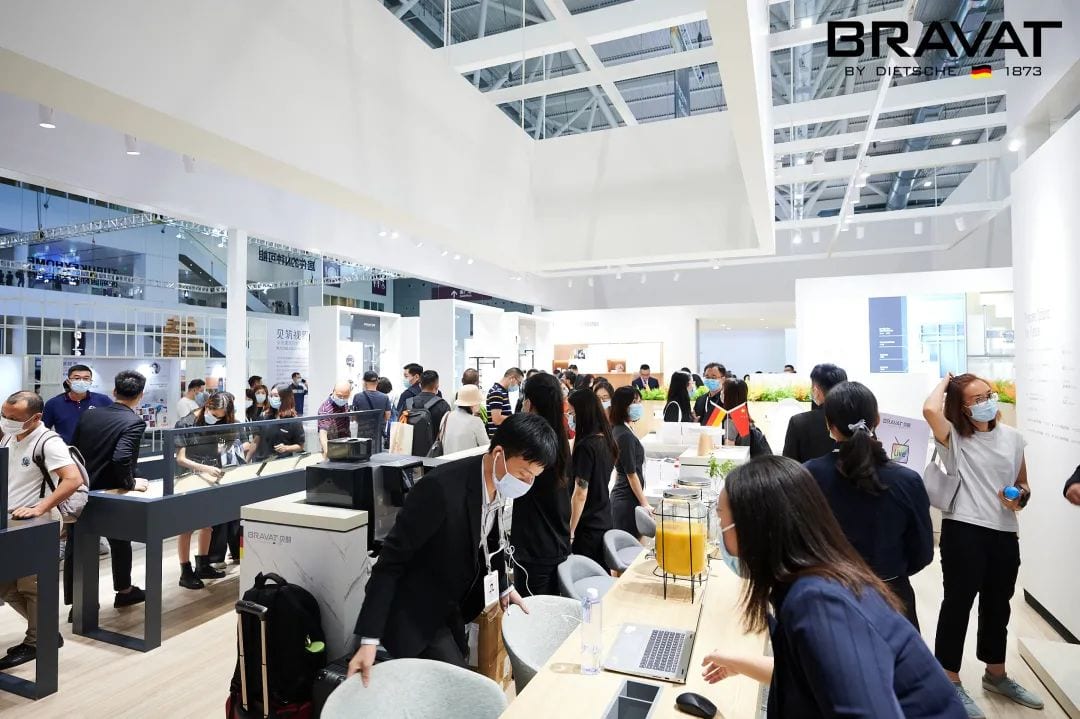 Among them, the complete household installation can be said to be the highlight among the highlights. In accordance with the 1:1 ratio, Bravat presented a case study of a small apartment, with the 36.5 square meters of the suite divided into eight spaces: balcony, wardrobe area, lounge area, bar area, kitchen area, fitted bathroom, bedroom and work area, presenting a complete home. Although the space is small, it is very cozy through the exquisite mix of Bravat products. According to the introduction, Bravat Household Complete Installations analyzes the needs of users in advance, plans the layout of households and the matching of parts according to the needs, and delivers them by means of factory pre-fabrication and on-site assembly. 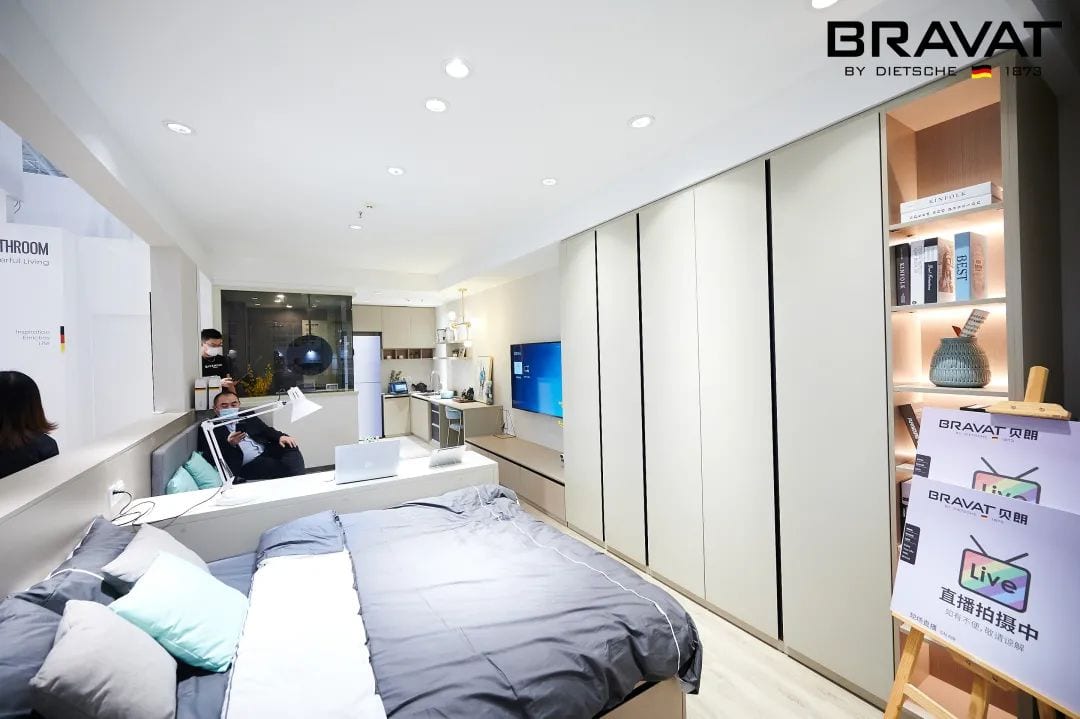 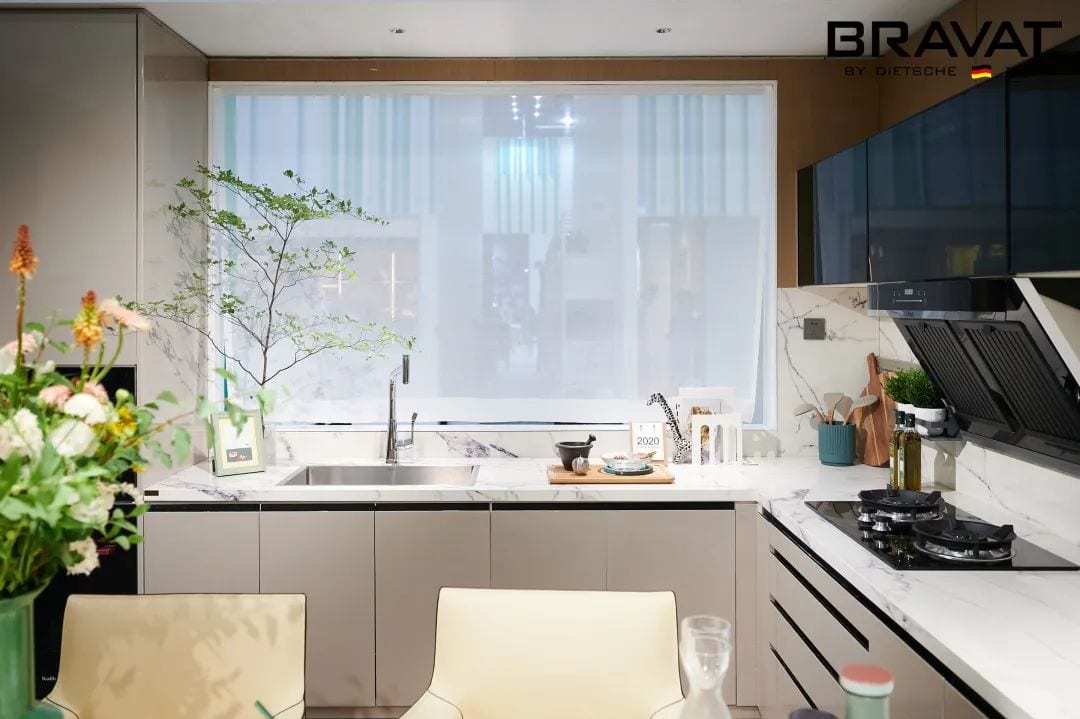 As one of the biggest difficulties in the industrialization of interiors, Bravat’s latest modular kitchen and bathroom solutions were also on display, including 6.3 square meters and 3.96 square meters of bathroom space, with intelligent, non-slip, easy-to-clean and long-lasting features, as well as a wealth of customization options – the Bravat modular bathroom, which includes 6.3 square meters and 3.96 square meters of bathroom space, is equipped with smart, non-slip, easy-to-clean and long-lasting features. -Toilet, faucet and counter basin can all be selected from the specified models. For assembled kitchens, Bravat brings a variety of sizes and styles from Hannover, Lyon, Munich and Lorraine, attracting praise from visitors and industry insiders alike. 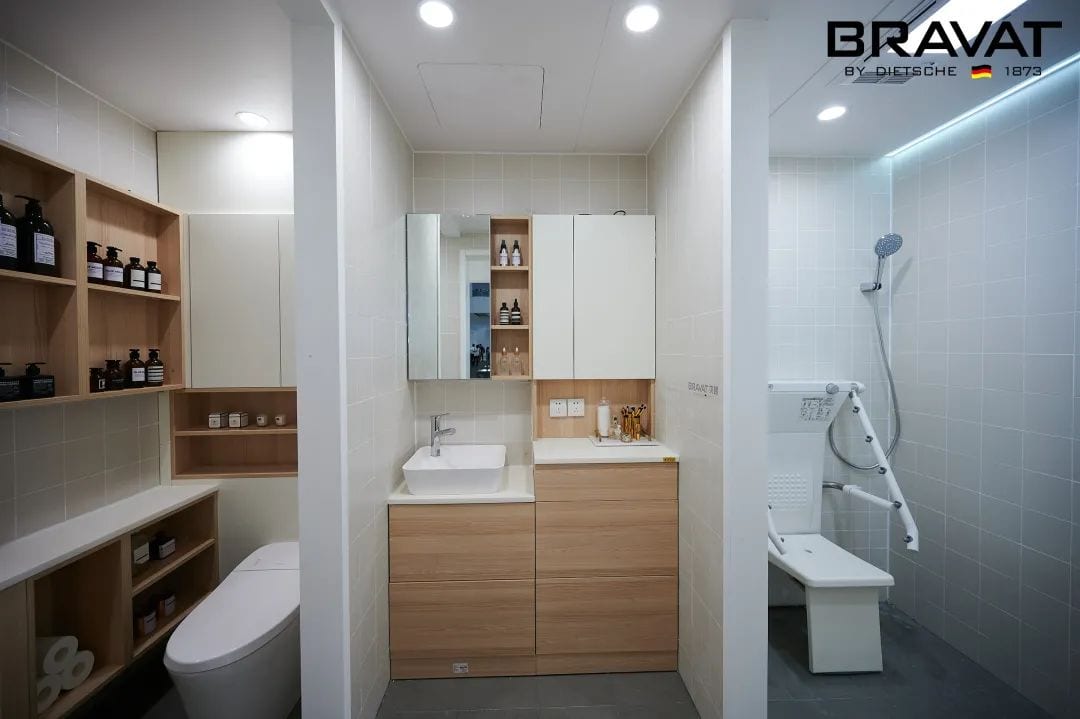 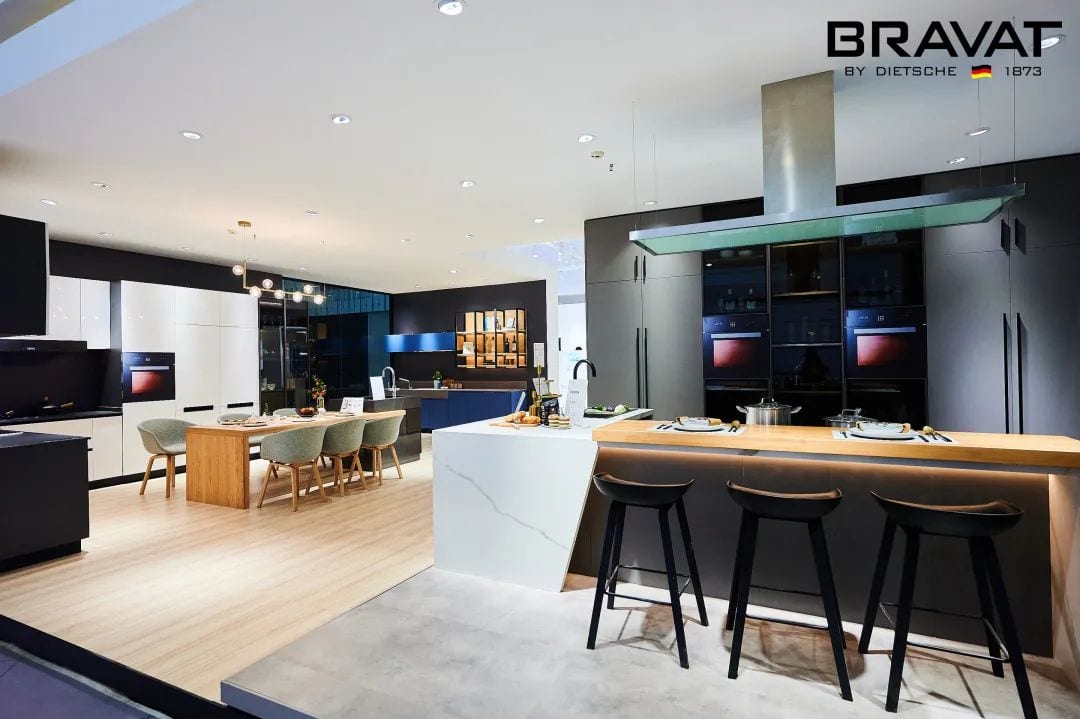 The 2020 epidemic has made consumers more concerned about healthy lifestyles. In order to meet consumers’ needs for a healthier lifestyle, Bravat has launched the “Touch Free New Home” series of products. This product adopts wireless capacitive induction technology and built-in wireless communication module, which can transform an ordinary toilet into a “waving toilet” through remote control system. “Bravat’s products can be used not only as a single accessory, but also directly in toilets that do not have their own sensors. 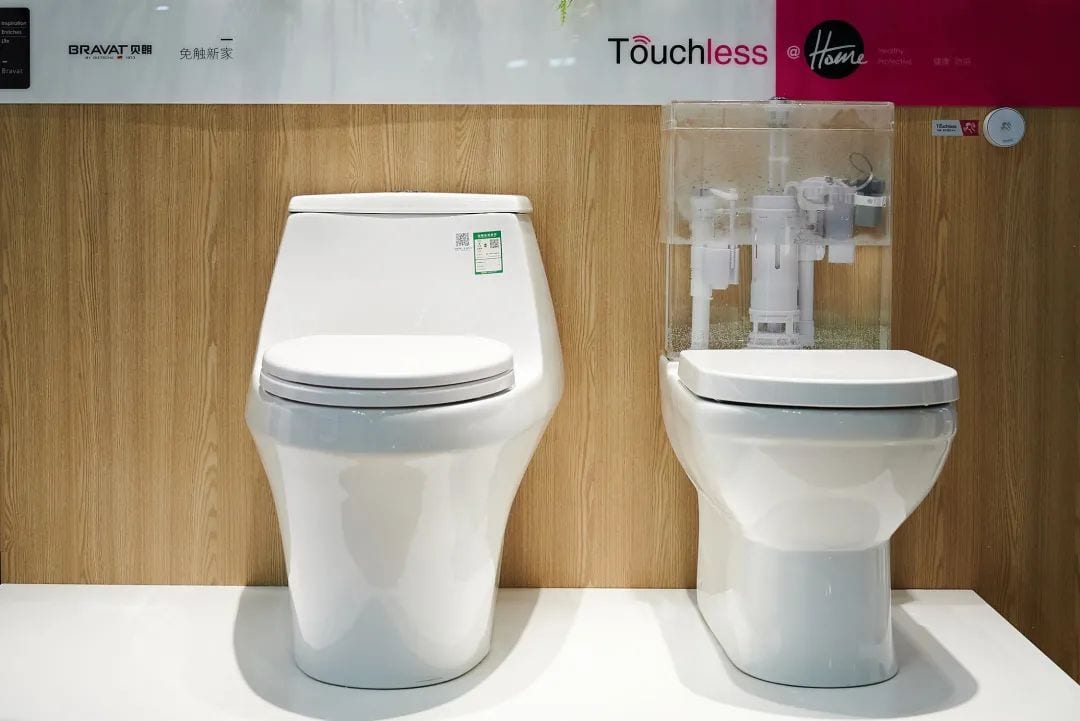 While Bravat continues to develop products in front of the wall, the company has also expanded its product line to include products behind the wall, such as the “Magic Wall Piping System”. It is understood that Bravat’s Magic Wall piping system, including prefabricated keel module, pipe module, sanitary ware module, etc., adopts dry construction method to solve the problems of low construction efficiency, time-consuming renovation, environmental protection consumables, etc. It takes only 10 days to complete the construction of a two-bedroom apartment of 60 square meters, which is 20 days shorter than the traditional construction method. 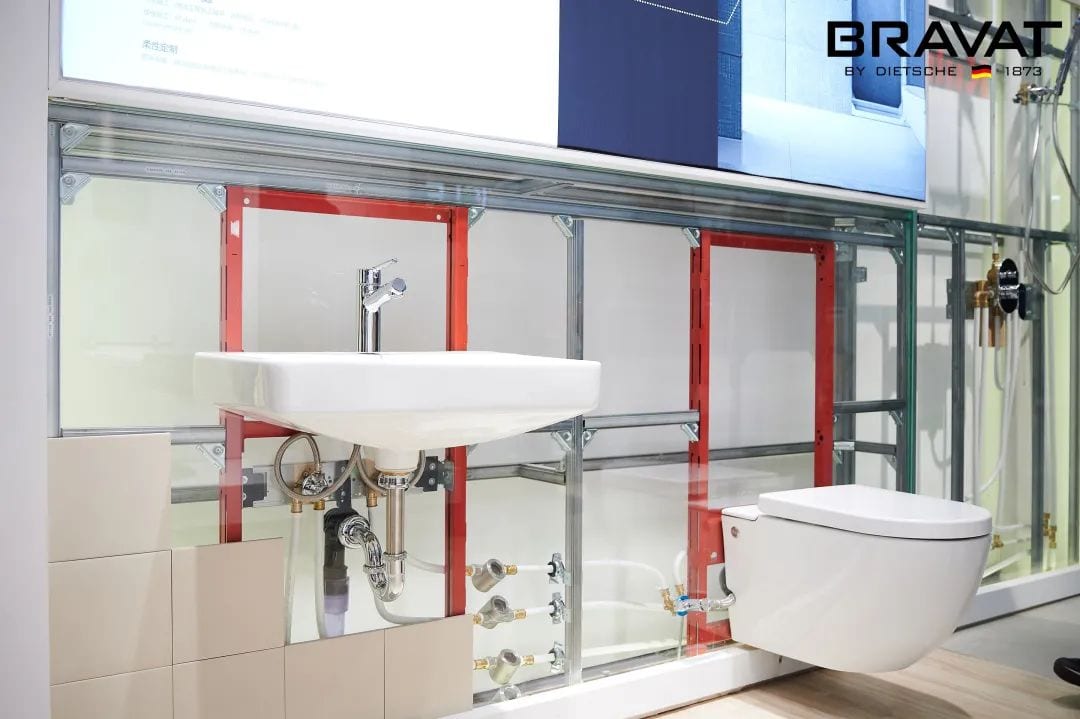 At this year’s Shenzhen Furniture Fair, the organizer also created nine different styles of themed show flats to showcase the “future community” living, six of which were selected with Bravat’s products, fully demonstrating Bravat’s ability to adapt space as an industrial leader in interior design. In addition, Bravat also participated in the organizer’s “Challenge the Impossible” activity – helping to build a double-decker assembled steel structure house within 24 hours, which made consumers and the industry once again feel the charm of assembled construction. 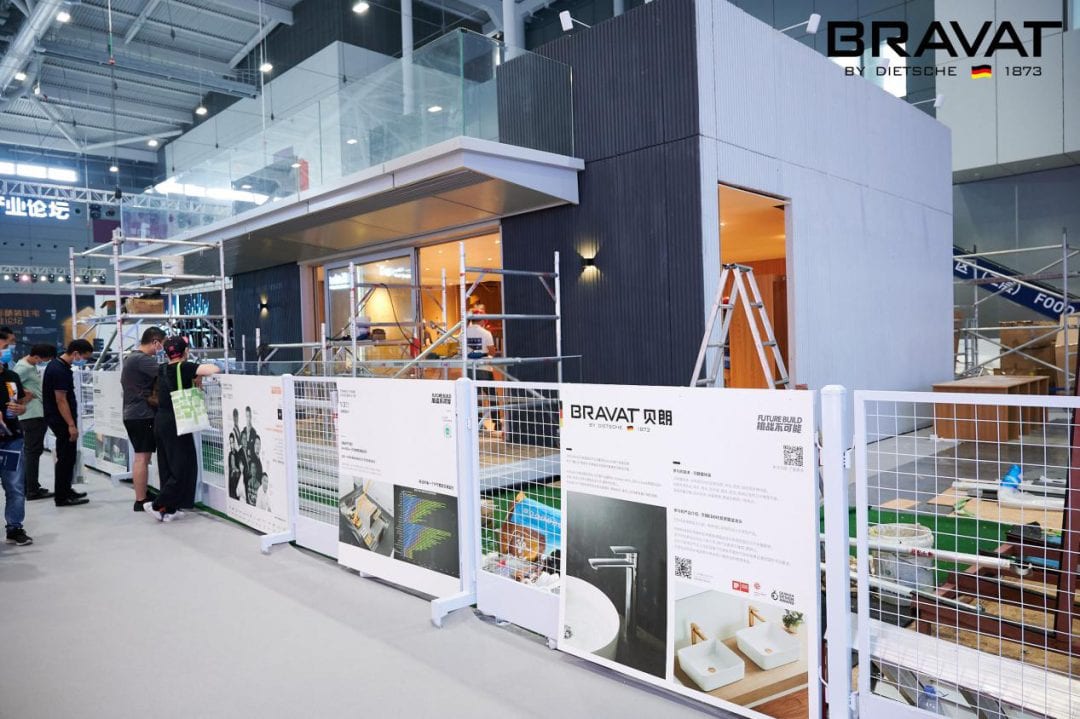 Why Does Bravat “So Powerful”?

Bravat’s continuous investment in product development, design and production in different fields is the reason behind the company’s rapid entry from single product bathroom to household installation. Especially in the field of kitchen and bathroom, which is the core of the industrialization of interior decoration, as these two places involve water and electricity at the same time, there are high requirements for the construction section and the connection of the building structure, so the enterprise must have the R&D and manufacturing strength to overcome these problems. 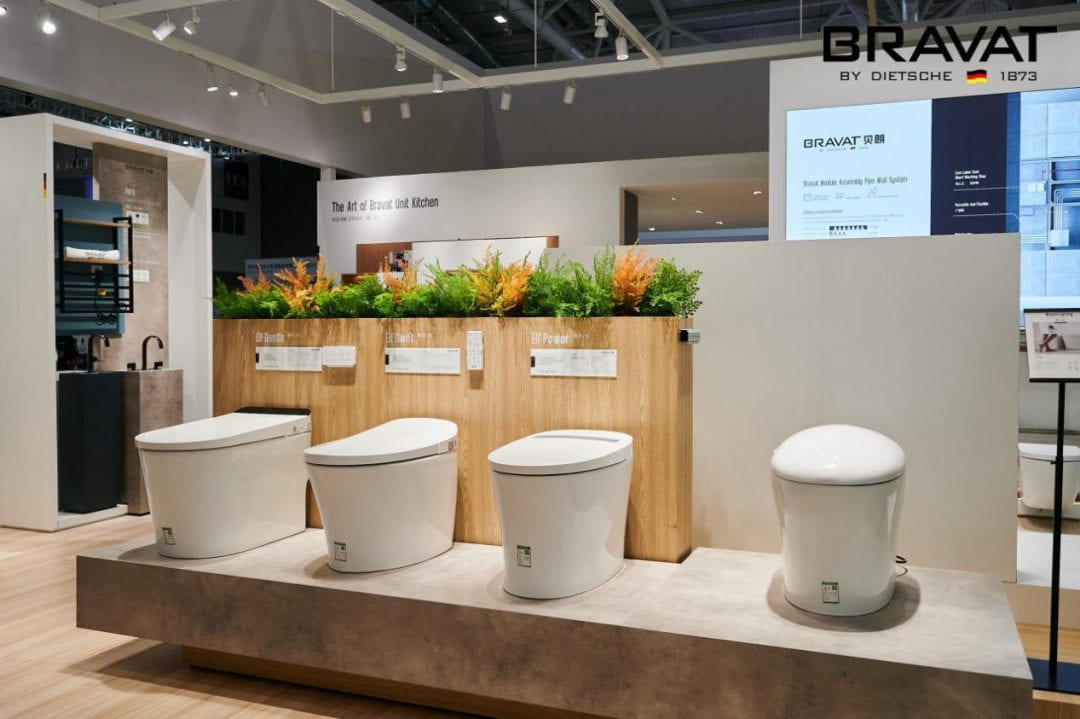 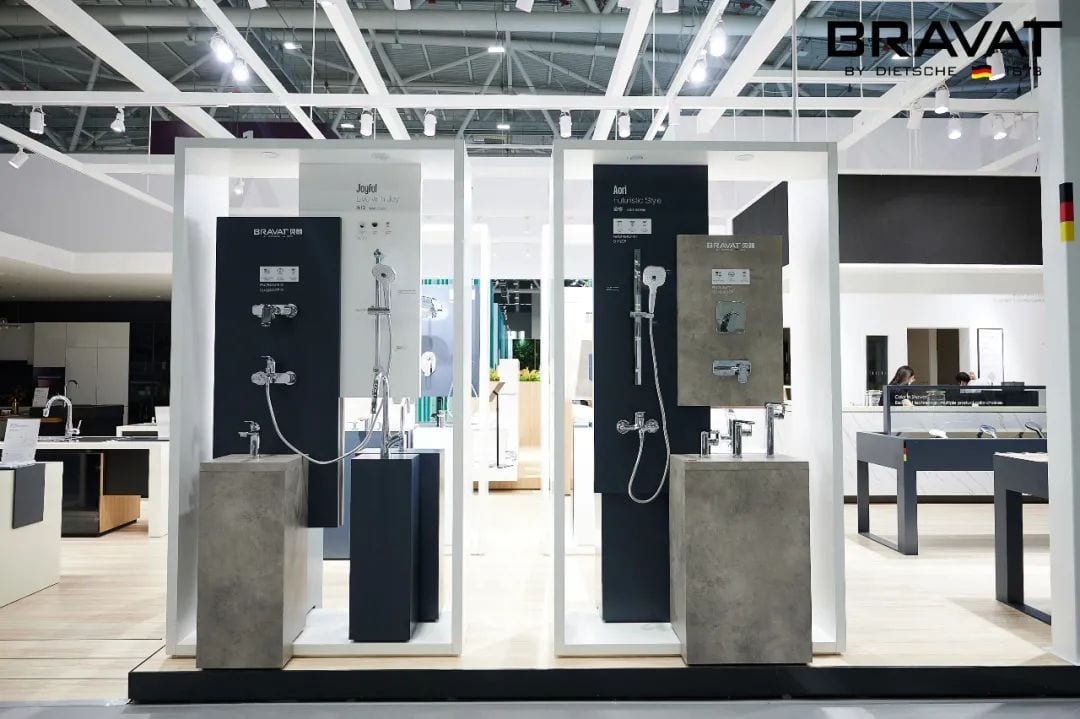 As the high-end bathroom sub-brand of Dietsche, Bravat has accumulated rich experience in the manufacturing of hardware faucets, smart toilets, bathtubs, showers and other bathroom products, and has been widely recognized by the industry and consumers since 2000. Based on this, Bravat has entered the fields of woodworking, assembled bathrooms and assembled kitchens in recent years, and has become one of the leading brands in the industrialization of interiors after years of trial, paving and layout.

Design to light up life. As a manufacturing industry, in order to win the favor of consumers, a company must also have the pursuit of beauty, art and humanistic concepts that go beyond the practicality of products. In this regard, Bravat is no less important. From 2016 to 2020, more than 29 Bravat products have won the Red Dot Design Award and the iF Design Award, making Bravat one of the most awarded companies in the bathroom industry. The relationship between the art of space and the living environment once again highlights Bravat’s superlative level of design. 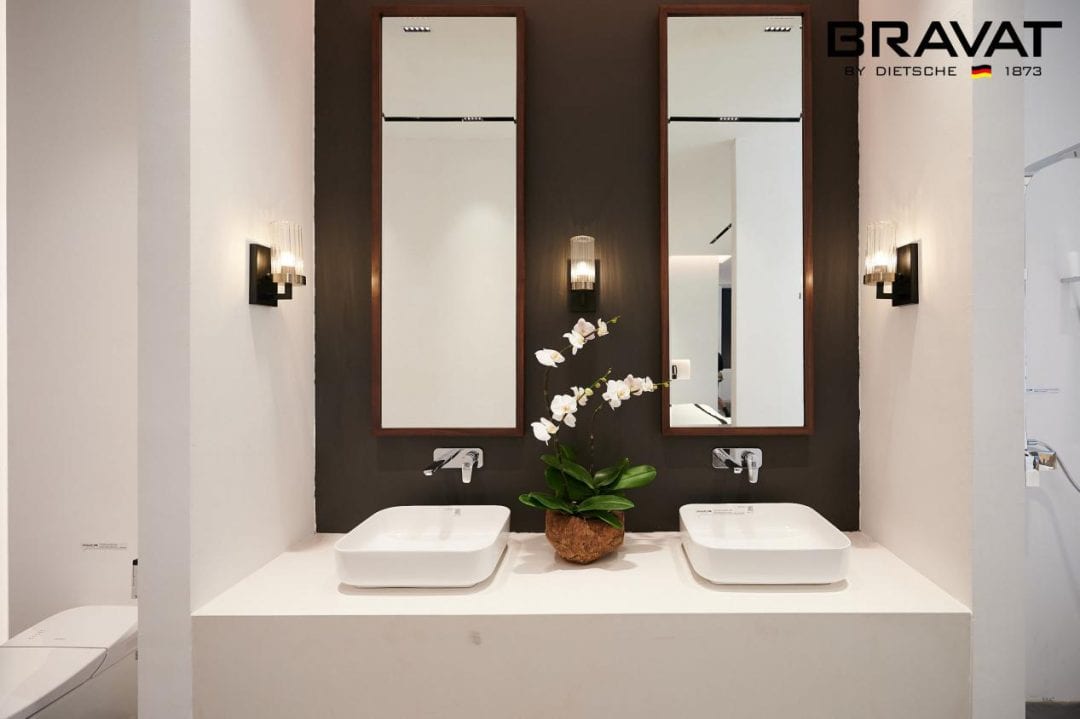 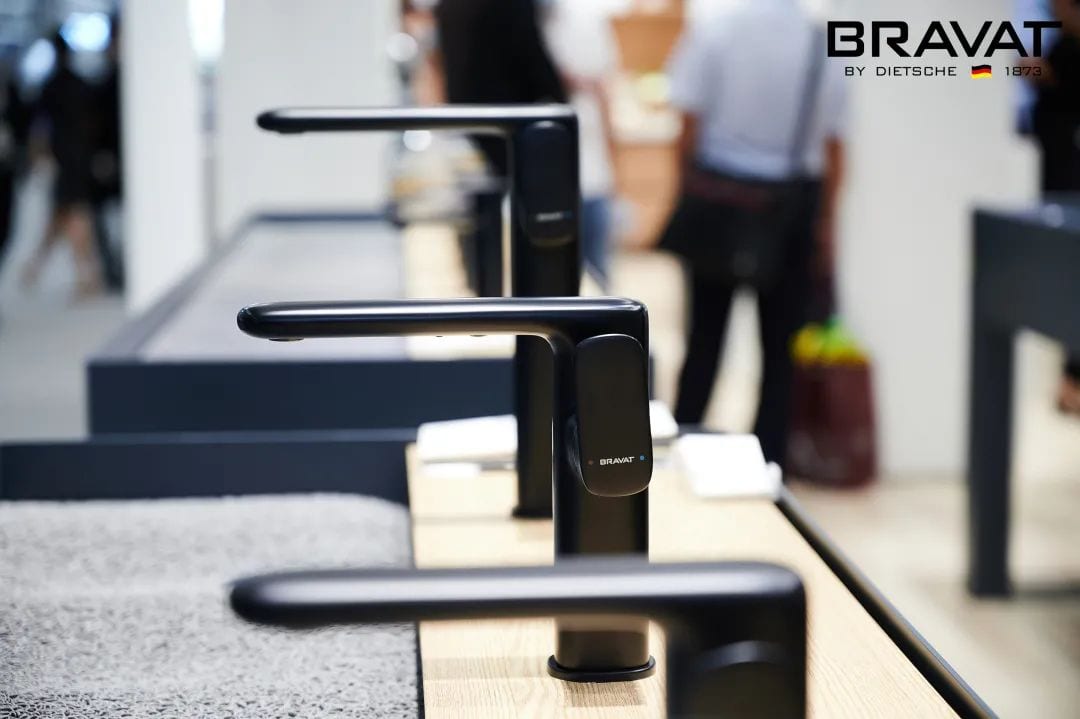 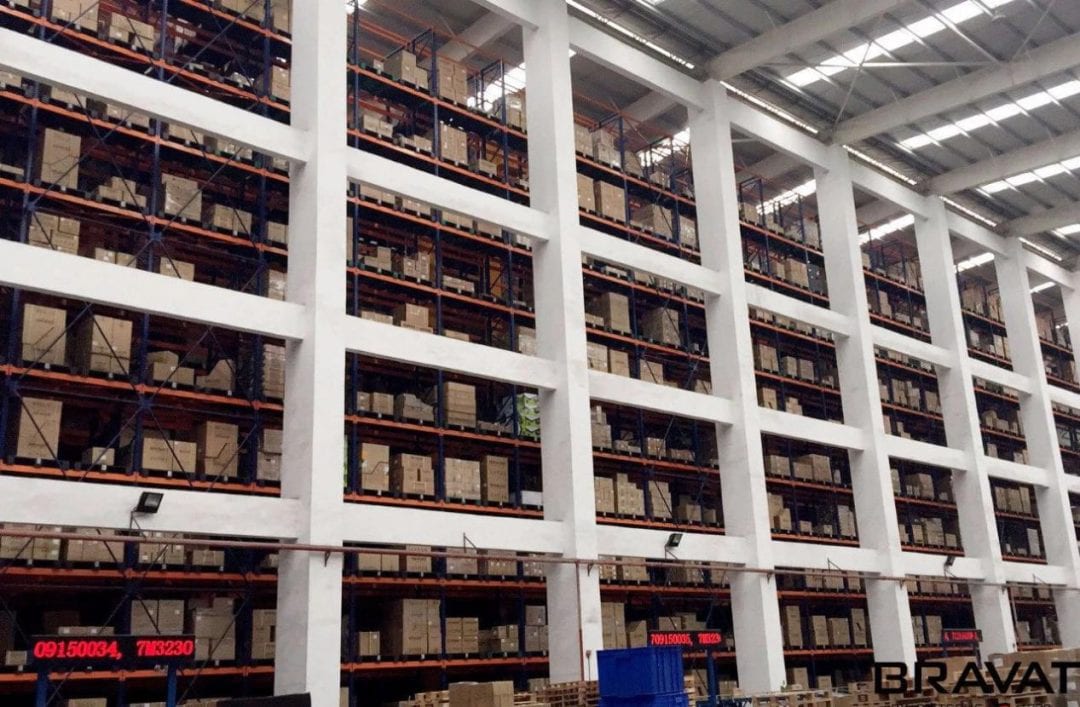 At the same time, the ever-changing consumer trend also puts forward new demands on the company’s product adaptation ability. For this reason, Bravat in recent years, together with the China Design Institute, China Standards Institute and other institutions to study the household type installation, and launched the “whole house parts storage research institute” and the study of the six spaces of the whole house “Bravat Meibang”, so that before a sanitary ware enterprise. Bravat’s rapid establishment of a “whole house” vision has transformed the company from a supplier of individual home furnishings to a provider of complete home furnishings.

Launching The “Next 20 Years”

In the era of rough housing, real estate companies only needed suppliers to provide products, and their service requirements might not be too high. However, with the advent of the industrialization of interiors, the service level of suppliers has been raised to an unprecedented level, and real estate companies, especially the leading real estate companies, are now taking service level into consideration in their selection criteria. Facing the development trend of the residential sector, Bravat chooses to open the “next 20 years” with the spirit of service after entering the mainland Chinese market for 20 years. 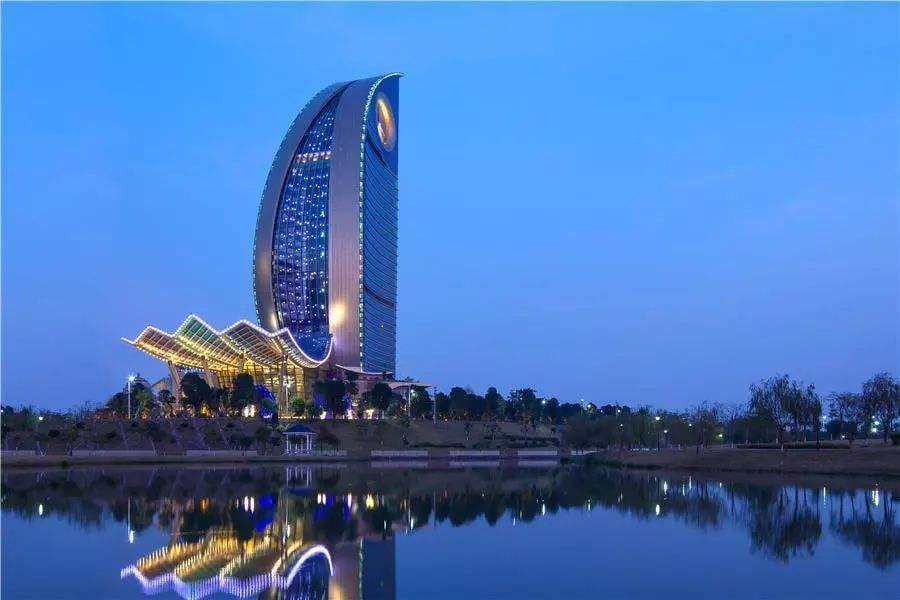 In recent years, Bravat has not only established in-depth cooperation relationships with leading real estate enterprises such as Country Garden, Evergrande Group, Poly Group and Baoneng, but also expanded the number of real estate enterprises it serves year by year, proving that Bravat’s service level is widely recognized and acknowledged in the industry. Not long ago, Bravat was awarded “Ceramic Sanitary Ware Category (Foreign Brand)” as a strategic and trustworthy supplier of China’s real estate industry chain.

In order to improve the overall service level of the enterprise, Bravat has changed its business philosophy from the source at an early stage, basing itself on the service providers and operators, providing all the necessary services for the real estate enterprises throughout the whole cycle from pre-design to delivery of finished products. For example, Bravat provides several dedicated product lines for real estate clients, with multiple trucks shuttling to various construction sites every day to respond to real estate developers’ service needs in a timely manner. 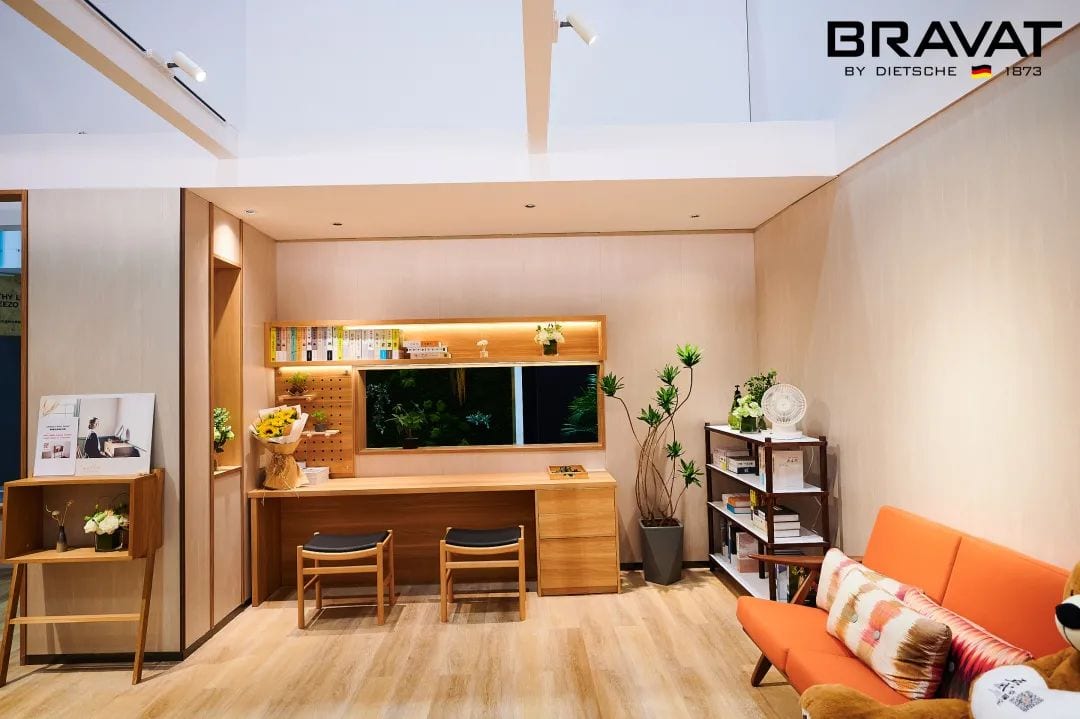 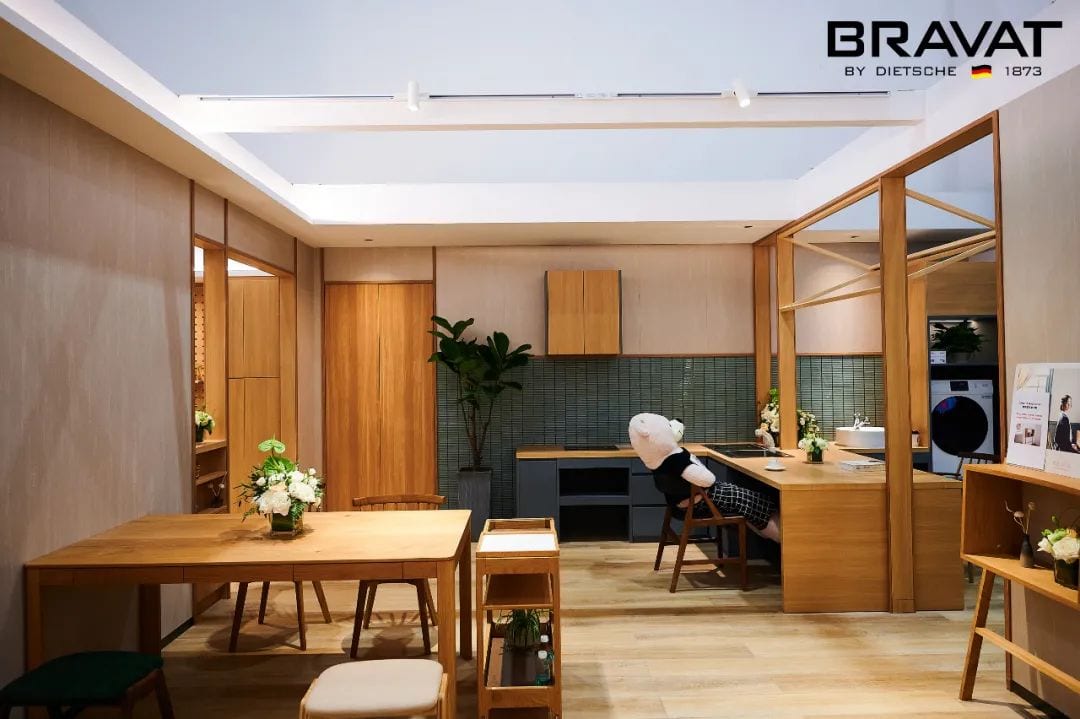 As for the end-users, Bravat has also built a system to serve the end-users, which is managed by Bravat’s “Bravat Home Service”. Through information technology, Bravat has realized “one product, one code” for its products – every product shipped has an exclusive QR code, which can be scanned and bound by consumers after acceptance of the products, and can be registered and bound by mobile phones if there are any problems later on. The Bravat Home Service is a solution for any problem. In addition, “Bravat Home Service” is also equipped with an online butler to help consumers solve problems within 24 hours, using human and intelligent systems. 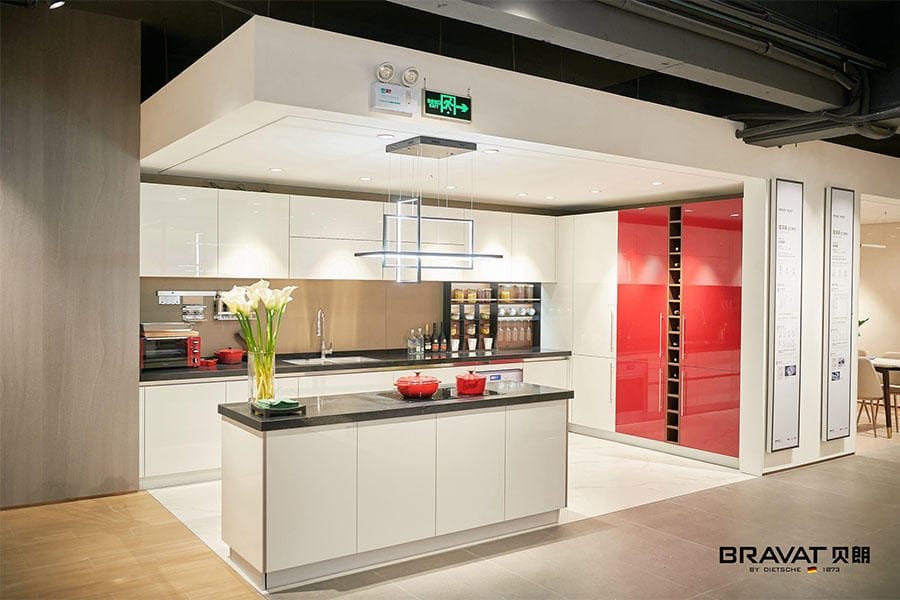 Bravat’s close cooperation with real estate companies has allowed Bravat to accumulate a wealth of experience in product installation and delivery, and industrial workers to become more familiar with the delivery and construction process. The close communication and interaction with real estate enterprises enables the front-end information about products or the whole industry to be fed back to Bravat in the first time, further promoting Bravat’s layout and development in the field of household decoration. 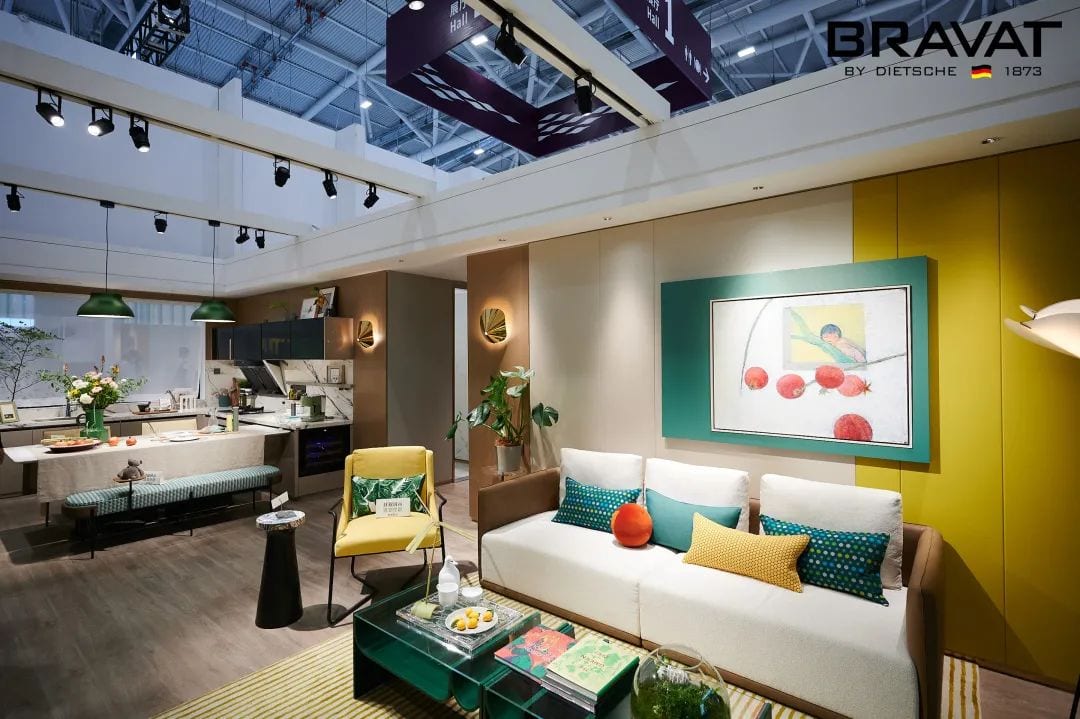 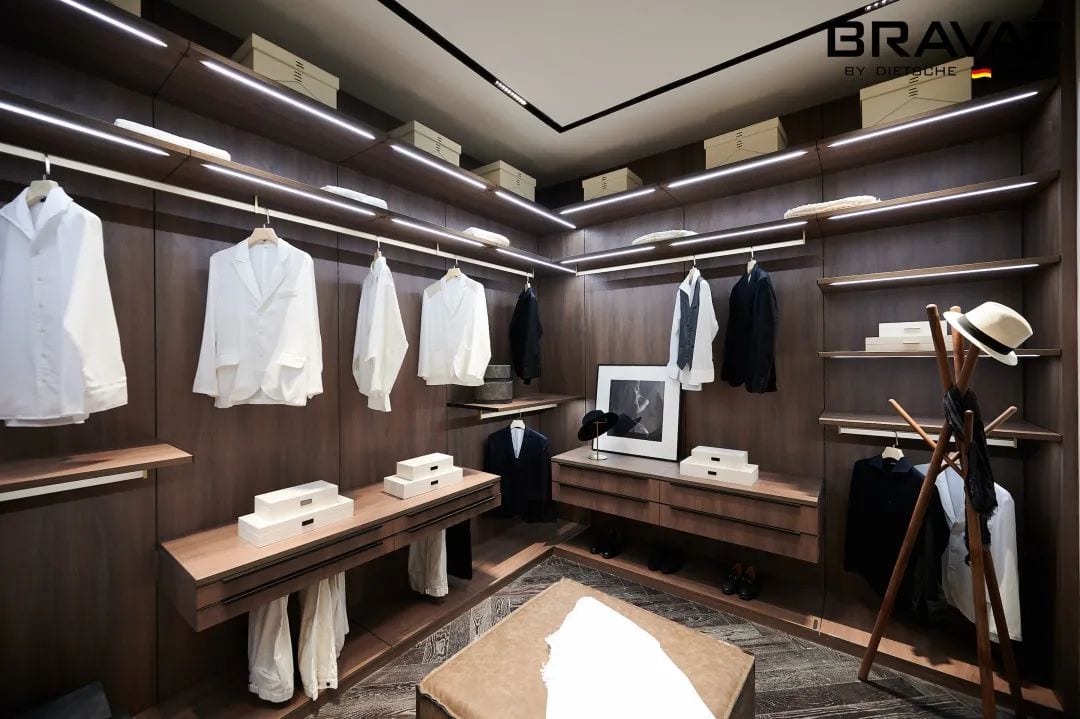 The capital is optimistic about the back of national and local policies to bring industry benefits. According to relevant statistics, the country has more than 30 provinces and cities have announced the development of assembled buildings, including Beijing’s guaranteed housing has achieved 100% full coverage of industrialization, Shanghai requires 100% of the outer ring outside the full renovation, Guangdong requires 2020 fully renovated new finished housing to reach more than 40%. In addition, Tianjin, Jiangsu, Zhejiang, Jiangxi, Fujian, Hunan, Henan and other places have also accelerated the popularity of assembled buildings and have announced the timetable for the landing of relevant measures. 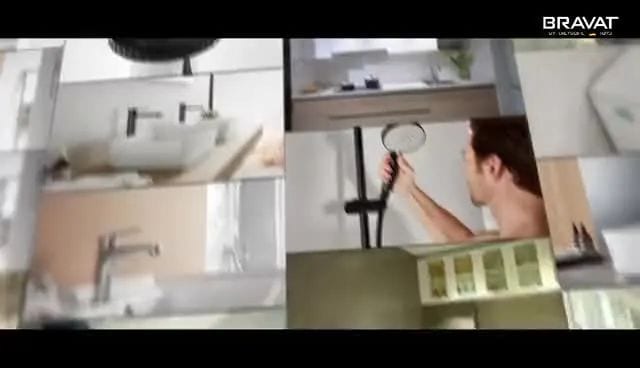 The opportunity is reserved for those who are prepared.Bravat can achieve what it is today, both in terms of consumer fever and industrial policy, but more because it has completed the layout long before the boom was formed.In 2016, when most sanitary companies were still working on custom sanitary and distributor channels, Bravat has taken the lead in shifting to the field of assembled sanitary, which is more than the 2018 assembly all over the world. The construction policy was introduced two years earlier.

In 2019, Bravat China’s chairman, Wangyi Guo, in an interview with Kitchen & Bath Headlines, bluntly stated that as a latecomer and a foreign brand, Bravat had encountered certain bottlenecks in the development of traditional channels in its early years, so it became inevitable for Bravat to find a new track. Obviously, Bravat was probably “forced” to enter the field of assembled bathrooms in the early days. However, it was this courage to change that made Bravat what it is today, and the leader in the industrialization of interiors today.

Share:
PREV： Country Garden’s Stake In Huida, Diou, Mengnls All Terminated
NEXT： Foreign Corporate Profits Fell Across The Board, Up To -125%