Jomoo, Huida, Hegii, FRAE, He Xiang And Other Bathroom And Home Enterprises Rushed To Help Henan

Recently, some areas in Henan were affected by extreme rainfall and flooding, which touched the heart of the whole society. In the emergency moment of flood relief, Jomoo, Hegii, FRAE, Monalisa, Fotile, Juran House and other household enterprises came forward to donate materials for Henan. They have fulfilled their corporate social responsibility while enhancing the visibility and reputation of their companies. As of 12:00 on July 26th, Kitchen & Bathroom Information has counted the following companies to help Henan.

After the flood disaster in Henan Province, Jomoo was the first to donate 5 million in materials in collaboration with China Charity Federation for the reconstruction of public facilities such as subways and hospitals throughout Henan after the disaster. In the affected areas, it launched a thunderous response of “free door-to-door service for sanitary products regardless of brand”. They also committed to provide protection services for all subway sanitary space in Zhengzhou, as a national brand to take social responsibility and drive more social forces to help flood relief in Henan. 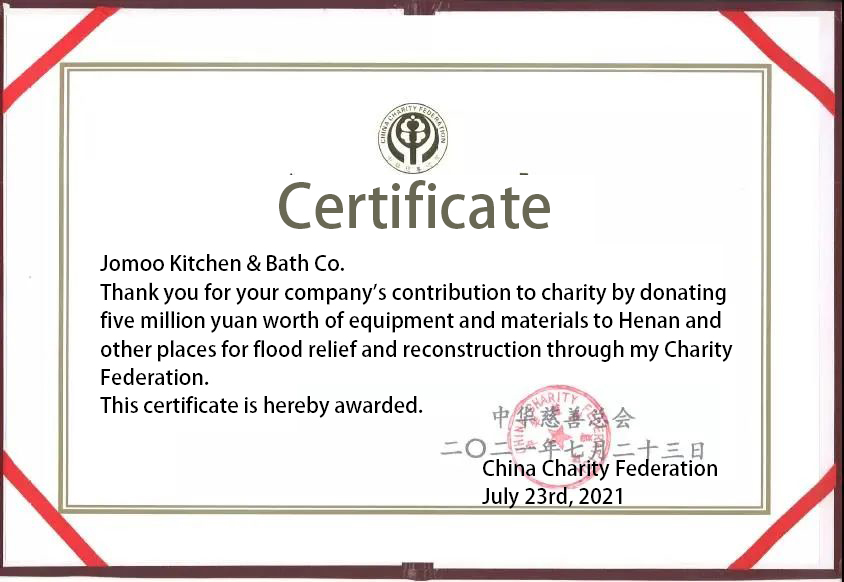 Donated 1 million yuan to rush to Henan, for the affected Huida customers to provide free product overhaul and replacement services 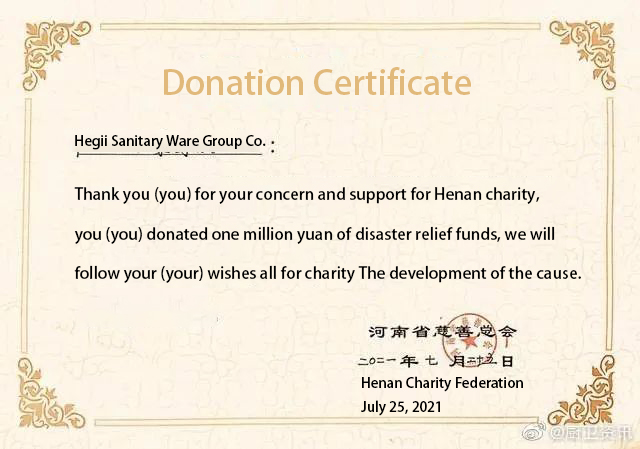 Donated 1 million yuan to help with flood relief in Henan

Donated a variety of materials 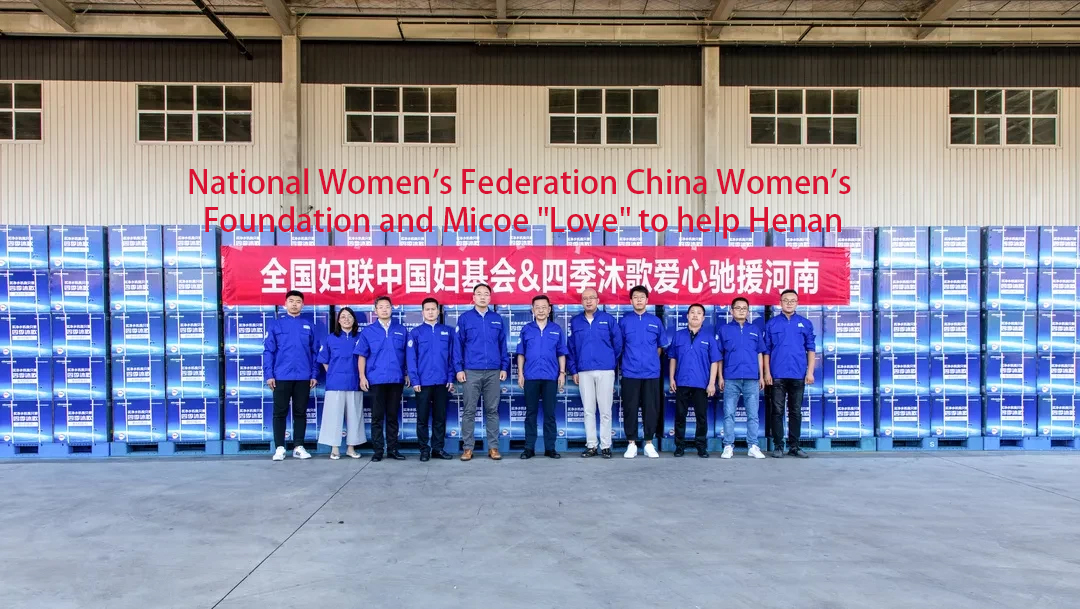 Fotile Group announced a donation of 5 million RMB for emergency relief and recovery work in Henan. In addition, Fotile said it is verifying the safety of all employees in Henan and checking the risks of its stores. Emergency deployment of resources and mobilization of Fotile’s Henan branch staff will fully assist the government and the community in local relief operations. 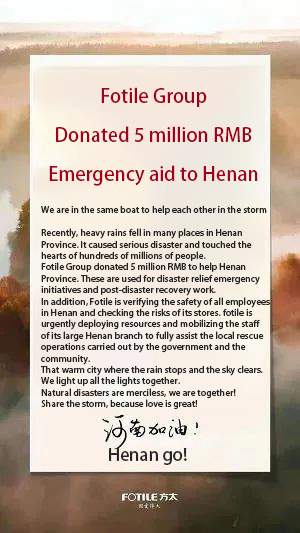 In order to better guard the safety of front-line rescue workers and to do its part in the rescue work, the board of directors of Yezhi Feng decided to donate RMB 1 million to the Henan Provincial Charity Federation.

Through the Henan Provincial Charity Federation, CNBM Group donated RMB 10 million to the disaster area in Henan Province for emergency relief and post-disaster recovery work to help the affected people tide over the difficulties together.

In order to ensure the personal safety of people in the disaster area, procure disaster relief materials, and help the government and the community in flood prevention and relief, Daikin China Group has also contacted the China Red Cross Foundation to donate RMB 1 million for emergency flood relief, disaster area prevention, livelihood support for the affected people, and post-disaster reconstruction in Henan. 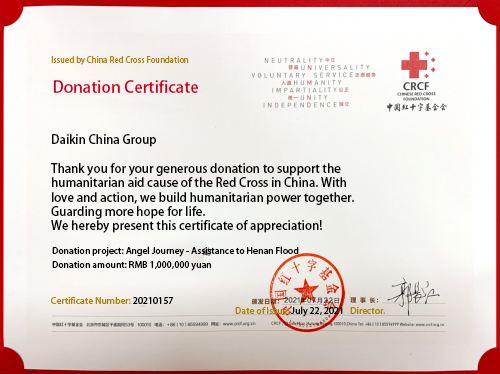 The Schindler Group urgently allocated 1 million RMB of living materials and sent a special truck to the disaster area in Henan Province on July 22 to make a contribution to the disaster relief. 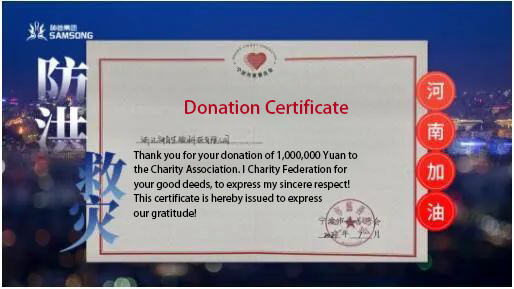 Knowing that some areas were seriously affected, Oriental Yuhong’s subsidiary, Tian Dingfeng, took immediate action to urgently allocate materials to the affected areas to help flood prevention and relief and post-disaster reconstruction. This time, Tian Dingfeng allocated a total of 6,000 square meters each of polypropylene filament geotextile and HDPE geomembrane. These are mainly used for water conservancy projects and dam impermeability projects in disaster areas. The first batch of materials had already departed from Tian Dingfeng’s Shandong production base on July 22 and was transported to Shangdi District, Zhengzhou City. 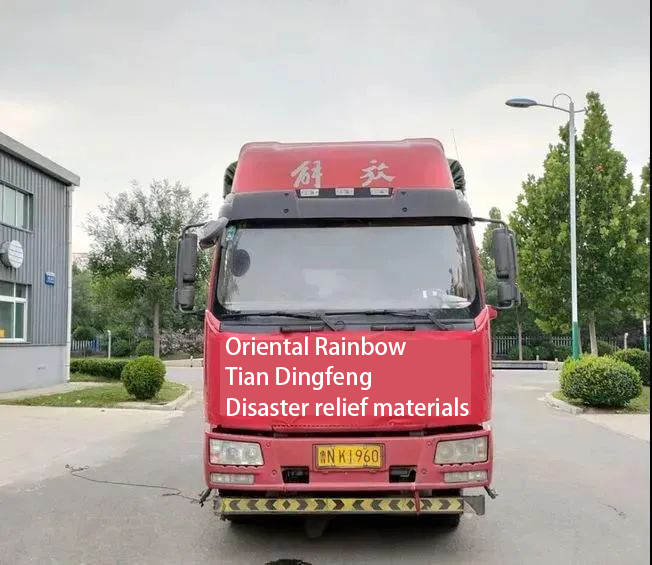 Emergency donation of 2,000 sets of desks and chairs for Henan

In response to the disaster in Henan, Nanjing Olo Home Furnishing Co., Ltd. announced the early launch of the 2021 “Orange School Desk Project” public welfare activity. The company has donated 2,000 sets of desks for the recovery of schools after the disaster. At present, Olo Home Furnishings has already started to deploy the preparation of materials for the docking and love desks and chairs for the affected schools. 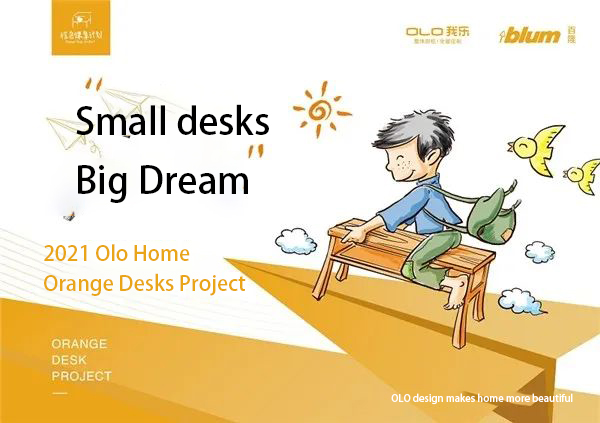 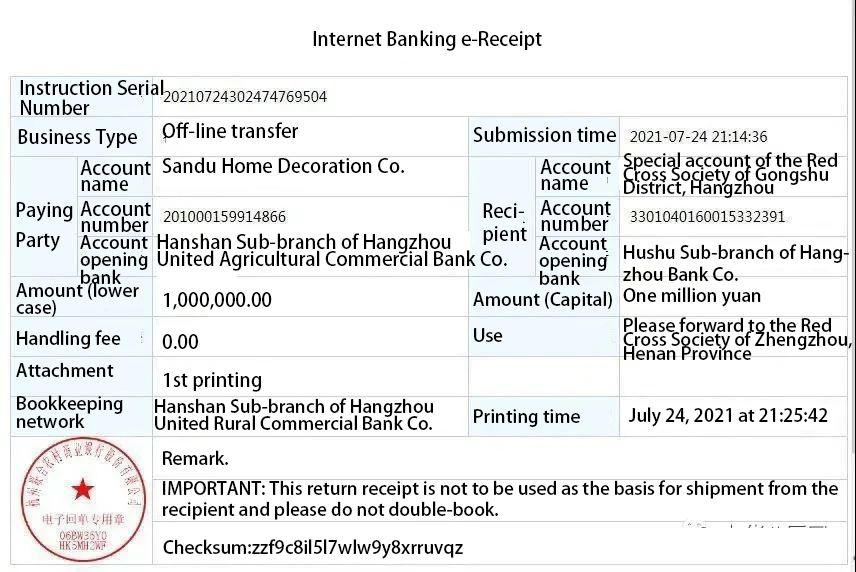 Youka Decoration headquarters donated 1 million to the Zhengzhou Charity Federation. These were used for the emergency procurement of relief materials, and post-disaster reconstruction. 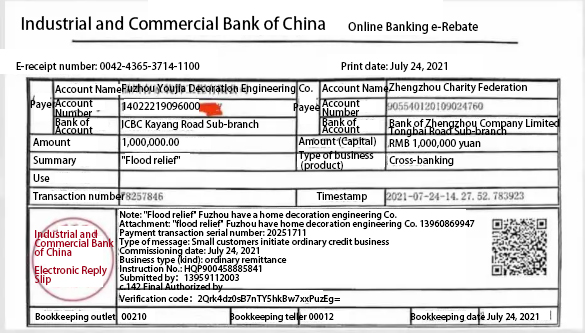 We are in the same boat to help Henan in the storm. Chinese home furnishing enterprises have come forward and taken the initiative to assume social responsibility in this flood situation in Henan. They have provided as much help as they can for the disaster relief, while also making an example for the whole society.