According to foreign media reports, Japanese companies Panasonic, Lixil and TOTO have become the top three building materials companies in the country with sales of 150.73 billion yen, 137.82 billion yen and 580.9 billion yen in fiscal year 2020, respectively. All three companies sales decreased year-on-year, including Panasonic decreased by more than 20%, Panasonic operating profit also fell than last year, while Lixil and TOTO increased. It is reported that the headquarters of the three companies are located in Osaka, Tokyo and Fukuoka.

Moen was recently named a National Preferred Partner by David Weekley Homes, one of the largest private homebuilders in the United States, for its excellent product and service quality. Moen is committed to providing its customers with well-designed products while maintaining the highest level of quality and customer service, said Mark Davis, Moen senior strategic account manager. The company is honored to receive this designation.

On August 31, Grupo Lamosa of Mexico completed the acquisition of Grupo Roca’s tile business for approximately $260 million. The transaction between Grupo Lamosa and Grupo Roca was approved by the shareholders’ meeting and will be financed by a $200 million bank loan for debt. This involves seven banks with an average duration of 4.3 years and a maturity date of five years. The remaining portion of the amount will be financed by the La Mossa Group’s own funds. It is worth noting that this business acquisition also includes the INCEPA, USCT and GALA brands of the Roca Group. 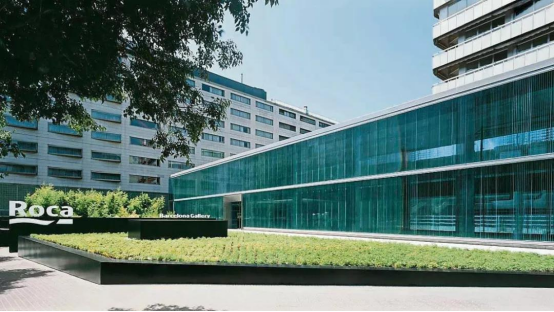 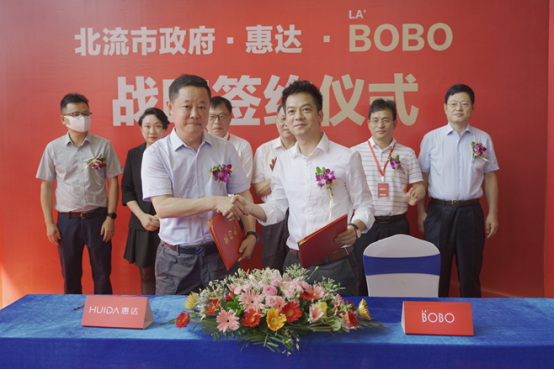 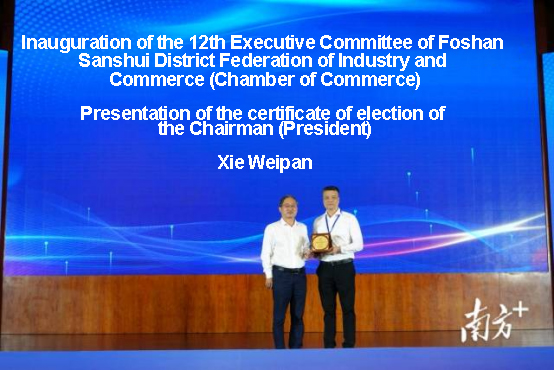 Jomoo Group posted sales of 7.5 billion in the first half of the year, an increase of 45% year-on-year 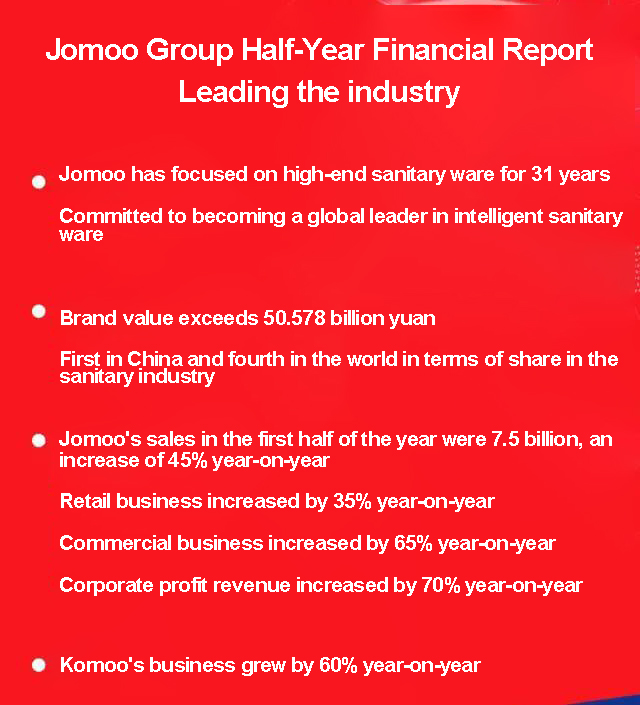 Recently, Arrow Sanitary held a “920Arrow Super Brand Day” kick-off meeting. It is online and offline resources to focus on publicity and momentum. It is interacting through the terminal stores, efficient joint efforts to empower the terminal market, with the determination to win, and strive to “win the war 920”. “Arrow super brand day” is the annual brand carnival Arrow bathroom. Smart toilet, custom sanitary ware, showerhead, custom shower room multi-category new products were released at the meeting. It has good price and good service. It’s linking online and offline stores to create a brand promotion festival belonging to Arrow. 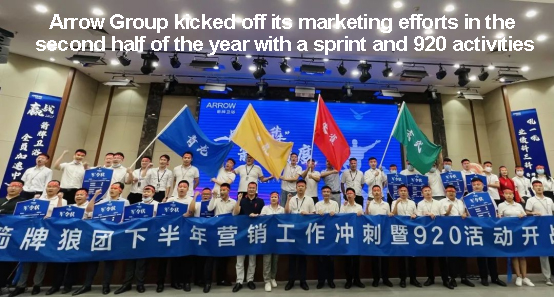 Recently, SSWW bathroom announced that it will jointly participate in the second season of “Doulife Home Festival” launched by ShakeYin on September 9. It is reported that SSWW in this event together with the “Doulife Home Festival”, in conjunction with the China Association of Quality Inspection, fashion home, live small help, to bring users “than the big brand, choose the design, and buy good things” one-stop service. 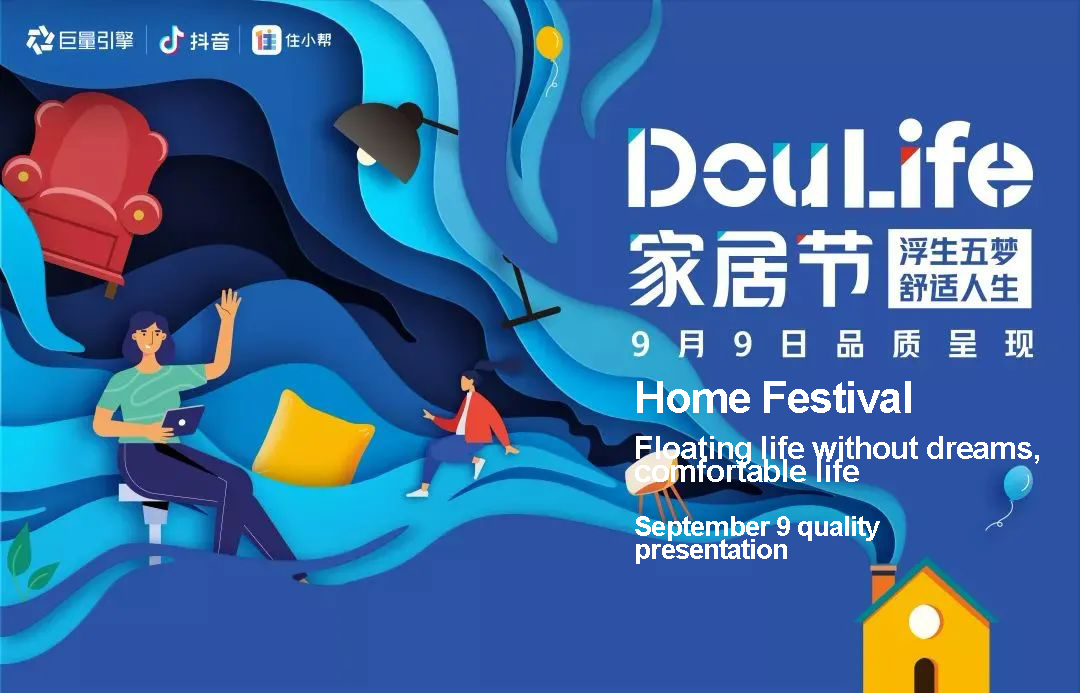 Orans carried out a strategic summit for core distributors in Jiangxi

On August 26th, the Orans Jiangxi Core Dealer Strategy Summit was successfully concluded in Jiujiang Xiyinmen. The summit was fully supported by Jiangxi Jiujiang Xiyinmen building materials and home furnishing mall, Orans Jiangxi operation center has changed the operation mode of the previous distribution of small stores to enter the local high-end stores. Its high-end brand and affordable price lead the brand’s comprehensive layout. The summit held in Jiangxi Jiujiang Xiyinmen is a major move to upgrade the overall brand of Orans, and also lays a solid foundation for the high-end positioning of Orans brand in Jiangxi market. 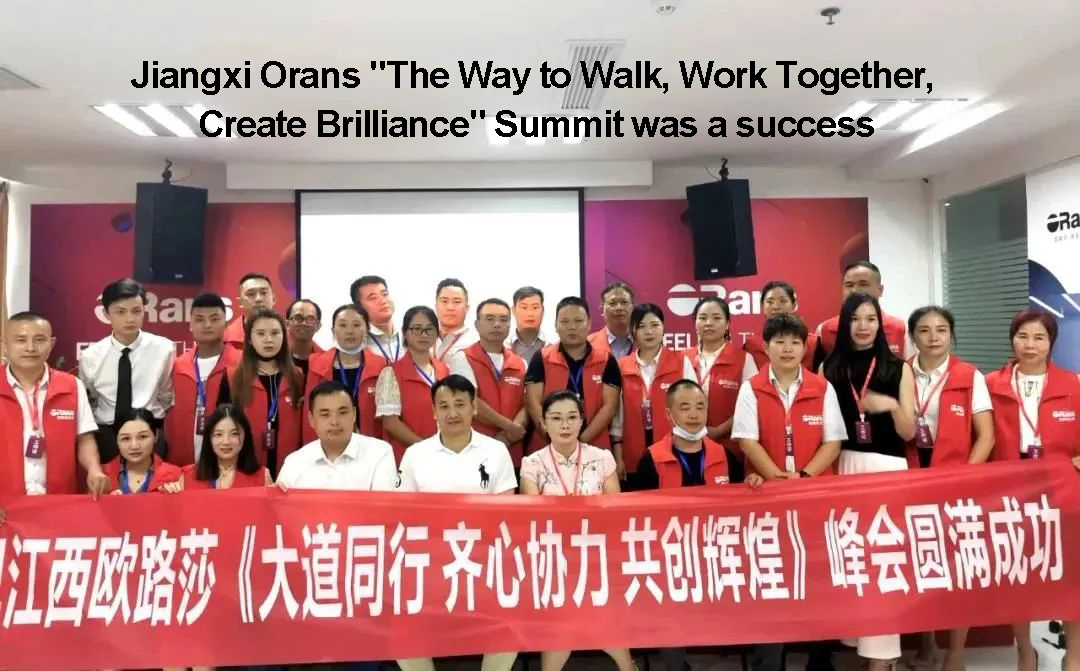 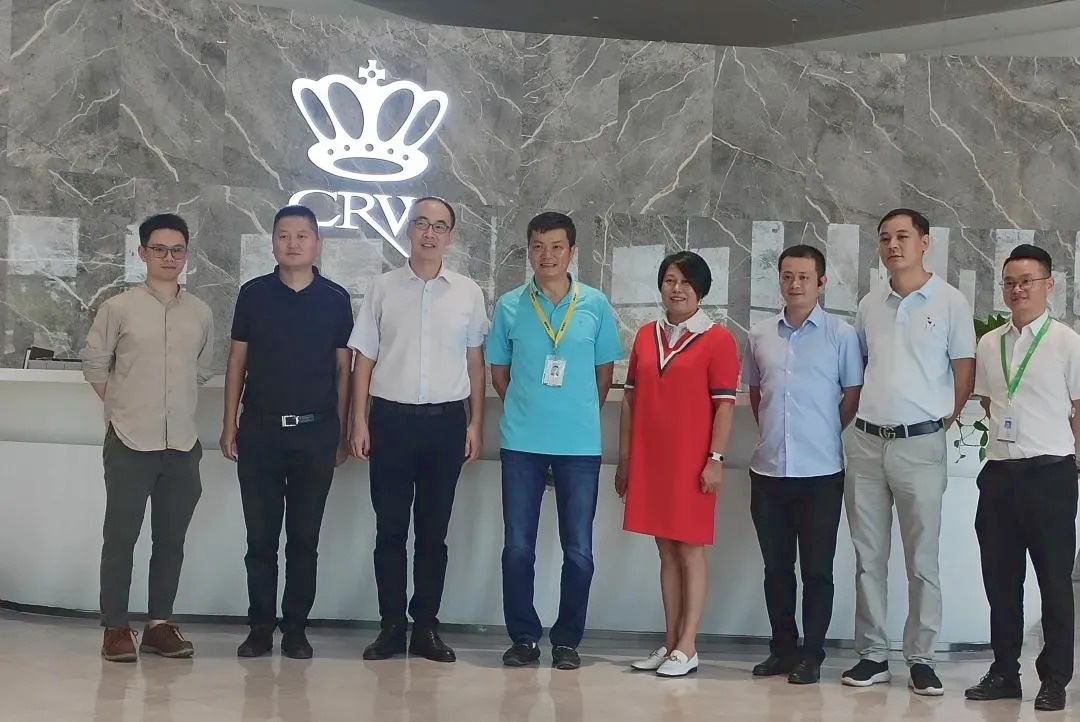 On August 30, Aosman Sanitary Ware and Beijing Zhaowei held a signing ceremony. They formally reached a brand content marketing partnership and started a new cooperation journey. Both sides are confident in this cooperation and hope that through this content marketing integration cooperation, they will further convey the market positioning of “high-end custom bathroom” to consumers. On the other hand, Aosman will further enrich the marketing content of the company and establish the emotional factor between the brand and consumers. 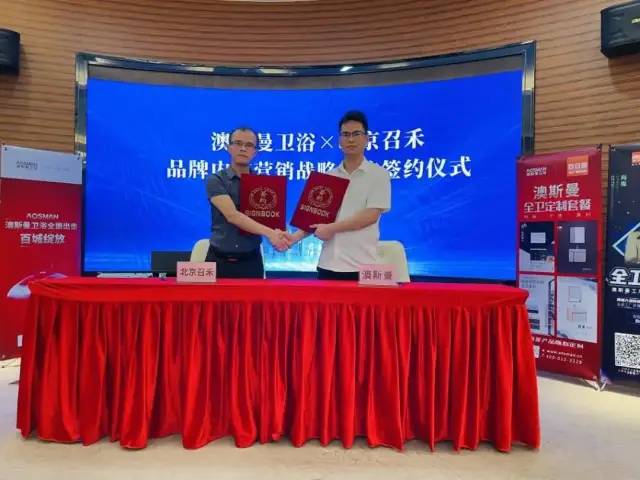 Following the launch of the Bolina Sanitary Ware Dealer Conference Zhangzhou Station on August 25, Bolina Sanitary Ware Domestic Marketing Center General Manager Qiu Cheyan resolved to take Shanxi as a model market and will expand the channel. On August 26-27, a 2-day-1-night “expand channels – strong terminal – win the future” Bolina bathroom 2021 VIP dealer conference Shanxi station opened. The meeting aims to promote the interaction between marketing elite and the company, reward the excellent dealers, encourage dealers and Bolina bathroom common development, and analyze and discuss the current situation of the bathroom industry and the future development trend and other issues. 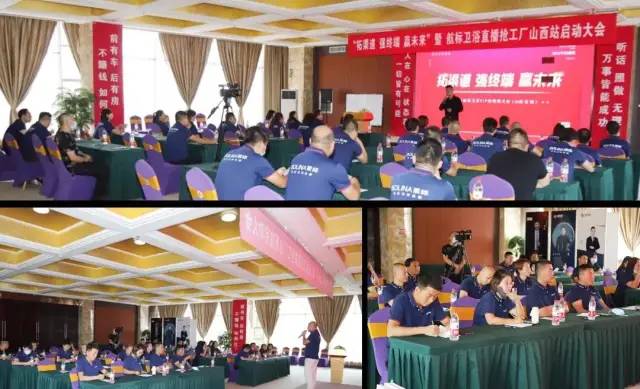 Diou Home’s net profit in the first half of the year was about 273 million yuan, an increase of 8.19% year-on-year

Recently, Red Star Macalline, China National Fair (Guangzhou) and the Nordic E, M & D, in to the letter, Skyline, can be to the home and other five major brands signed a strategic cooperation agreement. In the future, the five brands will rely on the resource advantages of Red Star Macalline and China National Fair, led by the new positioning of “design-led, internal and external circulation, the whole chain of synergy”, giving full play to the unique “exhibition-shop alliance” new model of the domestic furniture exhibition industry, actively empowering to The new pattern of the main domestic cycle. 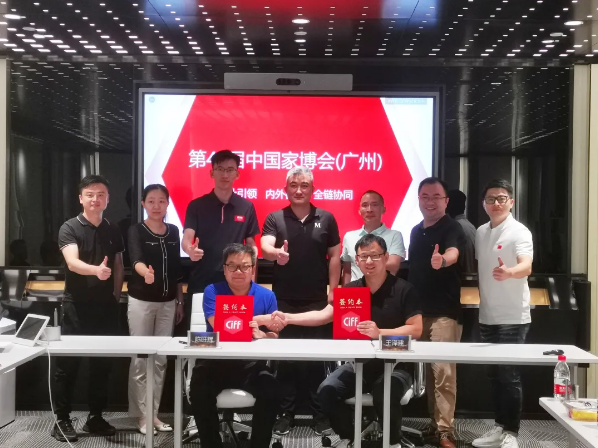 The net profit of Shangpinzhai in the first half of the year was 42.64 million yuan, an increase of 134.74% year-on-year

On August 27, Guangzhou Shangpin Home Furnishing Co., Ltd. released its 2021 semi-annual report. The company achieved operating revenue of about 3.177 billion yuan in the first half of the year, an increase of 40.19% year-on-year. Net profit attributable to shareholders of the listed company was RMB42.64 million, an increase of 134.74% year-on-year. By relying on the strategic positioning of “looking at BIM to do decoration and set furniture”, the total revenue of the whole decoration channel (full-caliber, including furniture packages) in the first half of the year was about 492 million, an increase of 97% year-on-year.

On August 30, Changzhou Artisan Unique Intelligent Home Co., Ltd. opened a subscription, subscription abbreviation for Artisan Home. This means that another upholstered home furnishing enterprise landed on the A-share market. The total number of shares issued by Craftsman Home is 20 million, the purchase price of 72.69 yuan. According to the prospectus disclosure, the IPO to raise funds of 1.008 billion yuan, planned for the new intelligent furniture production base project, new R & D center project, and new marketing network project. Craftsman Home is mainly engaged in the research and development, design, production and sales of intelligent electric sofas, intelligent electric beds and core accessories.

Recently, Dongguan Intermediate People’s Court of Guangdong Province announced a ruling shows that Guangdong Rong Yi Home Co., Ltd. was applied for bankruptcy liquidation because of the inability to pay off debts due and the apparent lack of solvency. It is understood that Rong Yi Home is still in default of payment to many suppliers. It has a large number of unsettled debts due, and has stopped production and business. In this regard, Rong Yi Home said that it has indeed been unable to operate normally. The relevant site has been vacated by the landlord and agreed to go into bankruptcy liquidation. Rong Yi Home was established in 2008. In 2016, it registered on the 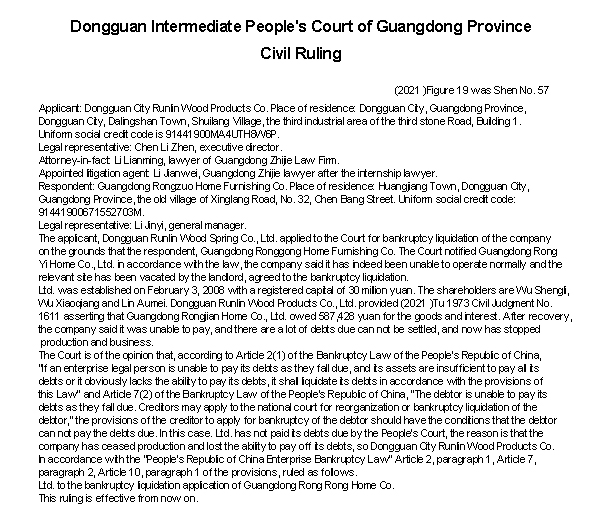 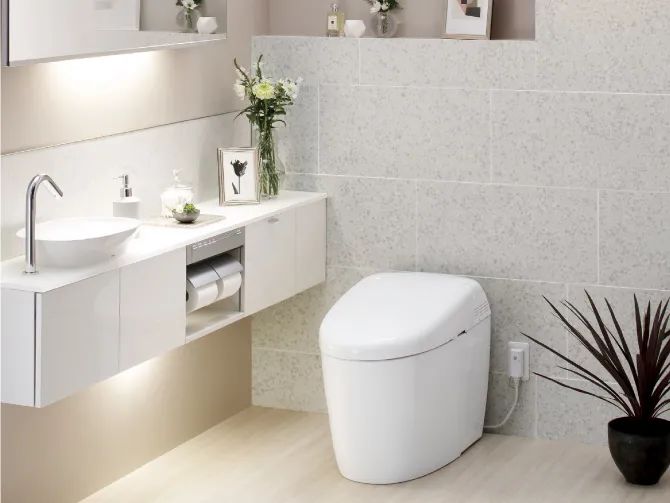 Xiamen, Fujian, the first half of the plumbing and kitchen industry exports amounted to 13.827 billion

On August 31, from Xiamen Kitchen Association was informed that Xiamen plumbing and kitchen industry continued to maintain a strong growth trend in the first half of this year. Its exports reached 13.827 billion yuan, an increase of 27.7% year-on-year. At present, Xiamen has about 200 sanitary ware enterprises, indirectly for the sanitary ware enterprises to do supporting services for more than 5,000 enterprises. Their products mainly when the production of hardware faucets, valves, floor drains, pendants, plastic shower, tank accessories, toilet lids, hoses, intelligent sanitary ware and so on.

Share:
PREV： In The First Half Of The Year, The Bathroom Three Giants Implemented The “Counterfeit” Action More Than 215 Cases. The Amount They Were Awarded Was More Than 2 Million Yuan
NEXT： Expansion Of DEALIM Bathroom In Korea. Yishou, A Leading Bathroom Mirror Decorator In North America