Sales In The First Half Of The Year Exceeded 27 Billion! This Home Giant Has Acquired Another Bathroom Company

Recently, FBHS announced that it has completed the acquisition of Aqualisa Holdings (hereinafter referred to as Aqualisa) for $160 million (about RMB 1.080 billion). FBHS owns well-known bathroom brands such as Moen and ROHL. In the first half of the year, its water innovation business had sales of $1.294 billion (about RMB 8.728 billion). The acquisition will strengthen FBHS’s global presence in the sanitary industry.

Spending about 1.08 billion yuan to acquire a British bathroom company

On August 1, local time, FBHS announced that it has acquired Aqualisa, a British bathroom brand known for its innovative and intelligent shower systems and customer service. The acquisition was completed on July 29 for approximately $160 million (approximately RMB 1.080 billion). 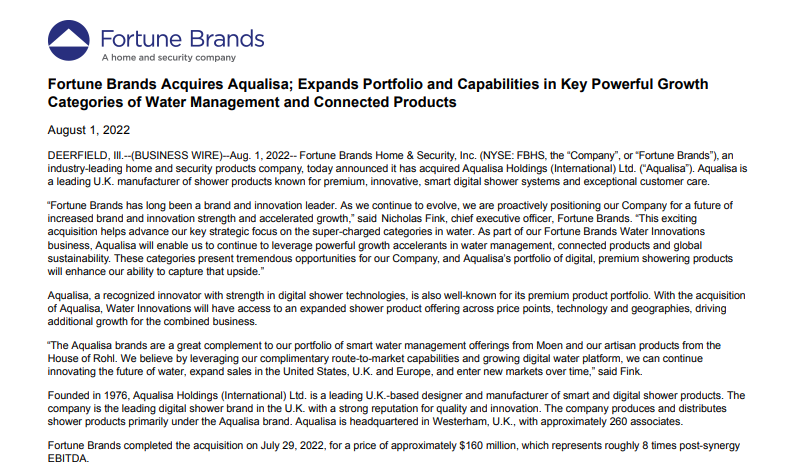 Nicholas Fink, CEO of FBHS, said the acquisition is a key strategy for the company in the water sector. As a member of the Water Innovation business, Aqualisa will enable the company to provide strong momentum in water management, connected products and global sustainability. Also, with the Aqualisa acquisition, FBHS’ Water Innovation business will gain access to digital shower products across price points, technologies and regions, driving further business growth.

Nicholas Fink also said that Aqualisa is a great addition to the company’s bathroom brands such as Moen and ROHL. They will leverage strong marketing capabilities and a continuously growing water innovation platform to expand sales in the U.S., U.K. and Europe, and enter new markets in the future.

According to public information, Aqualisa was founded in 1976 and is a leading manufacturer of intelligent shower products. It has a strong reputation in the UK market for shower products manufactured and marketed primarily under the Aqualisa brand. Currently, the company is headquartered in Westram, UK, and employs about 260 people. As previously reported, Aqualisa replaced its chief executive officer not long ago. Mat Norris has replaced Colin Sykes, who had held the position since 2018. The latter will continue to serve as a non-executive director and strategic advisor to the company.

According to the recently released FBHS H1 2022 report, the company achieved sales of $4.028 billion (approximately RMB 27.183 billion) from January to June, an increase of 9% year-on-year. During the same period, FBHS’ EBITDA was $373 million, a 6% decrease year-over-year. 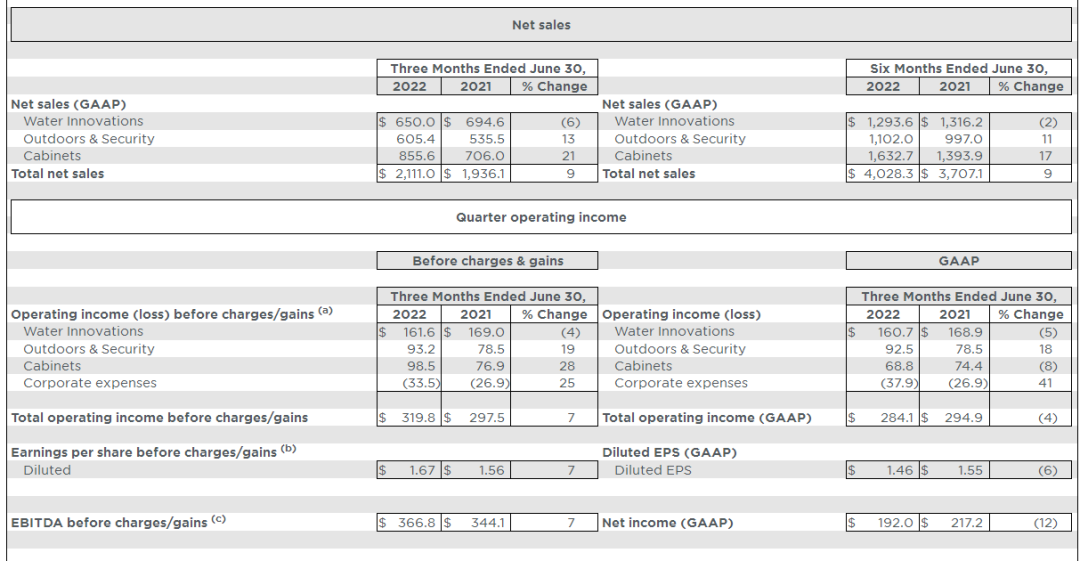 By business, in the first half of the year, sales of FBHS’ water innovation business (plumbing business) were $1.294 billion (approximately RMB 8.728 billion), a decrease of 2% year-over-year. Sales of the cabinet business, including bathroom cabinets, were $1.633 billion (approximately RMB 11.014 billion), an increase of 11% year-over-year. Sales of outdoor and security products business were $1.102 billion (about RMB 7.432 billion), an increase of 17% year-on-year.

In its semi-annual report, FBHS mentioned price adjustment measures, saying that it delivered strong results in the second quarter as inflation was fully offset by price and cost-related measures. They also said that sales of outdoor and safety products and cabinet products all grew, driven by these measures. However, sales in the Water Innovations business declined 6 percent in the second quarter due to the impact of the outbreak-related shutdown in China, and when China is removed, Water Innovations sales had a 4 percent growth rate and an operating margin of approximately 24.9 percent.

Acquired more than 20 companies in 50 years

As a giant company, although FBHS is not as well known in China as subsidiaries such as Moen and ROHL, the development of this company is a typical example of the growth of the home industry through acquisition. It can be said that the history of FBHS is a history of brand acquisitions.

In 1970, the company acquired Master Lock, a security lock company.

In 1988, the acquisition of Aristokraft and Waterloo

In 2011, listed on the New York Stock Exchange

In 2017, the acquisition of Shaws, Victoria + Albert

In 2018, the acquisition of Fiberon

In 2020, the acquisition of Larson storm doors

In 2022, the acquisition of Aqualisa

Share:
PREV： The Revenue Of Foreign Bathroom Giants In China Plummeted! Some Companies Have Reduced Sales Of Smart Toilets By 50%.
NEXT： Another International Design Award Announced! 14 Kitchen And Bathroom Products Compete For Top Honors