Two major bathroom projects landed in Heshan within a week

Jiangmen Heshan has been actively building a “national bathroom zone for China-EU cooperation” in recent years.
At present, many key projects have been landed one after another.

According to Heshan News release, on November 14, Heshan City Dinghe Intelligent Sanitary Ware Co.Ltd. and the relevant person-in-charge of Zhishan Town spoke one after another at the ceremony.
They said that the foundation stone of Dinghe Sanitary Ware Company is an efficient initiative of Zhishan Town to actively promote “Sino-European cooperation”, deepen “sanitary ware manufacturing” and enhance industrial competitiveness.

Heshan Dinghe Intelligent Sanitary Ware Co. Ltd. is a new company established by Heshan Dingquan Sanitary Ware Industrial Co., Ltd. located in Dongxi Development Zone, Zhishan Town, with a planned total investment of 150 million yuan.
The main research and development, production of shower sets, bathroom faucets, plumbing parts and related hardware products. After the project reaches production, the annual output value is expected to be 250 million yuan, driving the employment of 500 people nearby.
On the other hand, the parent company, Heshan Dingquan Sanitary Ware Industrial Co., Ltd. was registered in 2015 in Zhishan Town and has been operating with leased plants.

This has been the second bathroom project within a week to address the town. Previously, Heshan another “Sino-European cooperation” key projects also choose the address of the town.
According to the Heshan news release, on November 7th, Heshan Sino-European cooperation key project – Heshan City Gallium Yang Sanitary Ware Co. ltd.
With a total investment of 100 million yuan, the project will mainly develop and produce electronic, intelligent and integrated sanitary ware and hardware products, which is expected to have an annual output value of 350 million yuan and drive employment of over 300 people.

Due to the local government’s support for enterprise exports, many enterprises that are optimistic about the development prospects of Zhishan Town have successively increased their investments in the area.
In 2017, RIIFO Sanitary Ware Production Base was landed in Zhishan, with an investment of 500 million yuan and an area of 155 mu.
Ltd. spent 95 million yuan to establish a new factory in Zhishan Town, installing six advanced automated production lines, which went into operation in October this year, focusing on the European market.
Guangdong Huaxia Happiness Foundation Co. Ltd. and Heshan City Gallium Sanitary Ware Co., Ltd. have also settled in Zhishan in the second half of 2022, helping to speed up the local “China-Europe cooperation” strategy.

According to the China Building and Sanitary Ceramics Association statistics, from January to June 2022, China’s total exports of building ceramics and sanitary ware amounted to $12.160 billion, up 9.33% year-on-year.
Among them, the total export of building sanitary ceramics products was 6.537 billion U.S. dollars, up 4.08% year-on-year.
Total exports of hardware and plastic sanitary ware products amounted to $5.623 billion, up 16.15% year-on-year.
From the export flow, the first half of 2022, China’s sanitary ceramics exports to the top ten destination countries in order for the United States, South Korea, the Philippines, Vietnam, Nigeria, Canada, Australia, India, the United Kingdom, Malaysia. 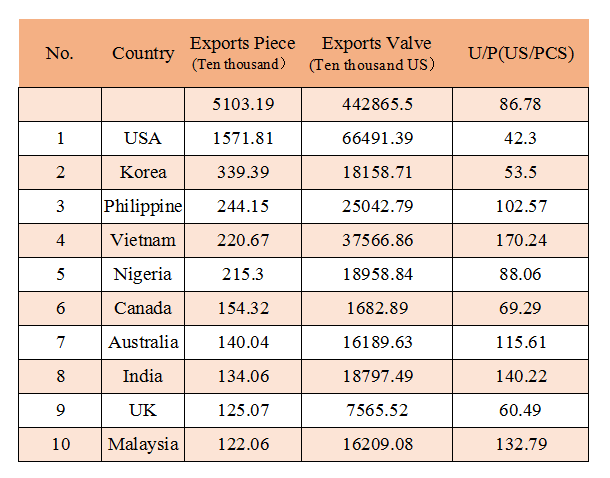 From the data, although China’s sanitary ceramics products to the European single country export scale is not large, but Europe as a whole has been an important place of export for a number of sanitary ware production areas in China.
Foshan, Heshan, Nan’an, Xiamen, Tangshan and many other places sanitary ware enterprises have produced exports to Europe.

Industry a number of head enterprises also attach importance to the European market, nine mu 2017 set up a European operations center, a comprehensive entry into the European market;.
Hai-O Sumitomo’s product sales path has covered the United Kingdom, Germany, Turkey and other European countries.
Europe is also the main export destination of Songlin, Ruierte, ideal sanitary ware and other enterprises.

In recent years, European consumers have increasing demand for intelligent sanitary ware, shower rooms, shower trays and other products, along with the expansion of the market, it is believed that more Chinese sanitary ware enterprises will enter the European market in the future.