January-August More Than 21 Bathroom Company Assets Were Auctioned Off

According to incomplete statistics, in the first eight months of 2020 at least 21 sanitary ware enterprise assets were auctioned or will be auctioned, involving Zhejiang, Jiangxi, Anhui, Fujian, Guangdong and other parts of the country. In the same period, there are multiple claims involving sanitary ware enterprises are being auctioned or are investment, most of these enterprises are not clear, its creditors in the auction platform to lower than the debtor’s actual arrears of the starting price for the auction.

According to the Ali judicial auction platform public information shows that from January to August 2020, the platform shelves more than 59 cases and sanitary enterprise related assets auction bids, involving 21 sanitary enterprises, including Zhejiang, Jiangxi 5 each, Anhui 4, Fujian 3, Guangdong, Hunan 2 each.

(Based on information publicly available on the Ali Judicial Auction Platform)

Recently on the shelves, the starting price of more than 10 million yuan of two auctions were involved in Hunan first Tao stainless steel bathroom Co. 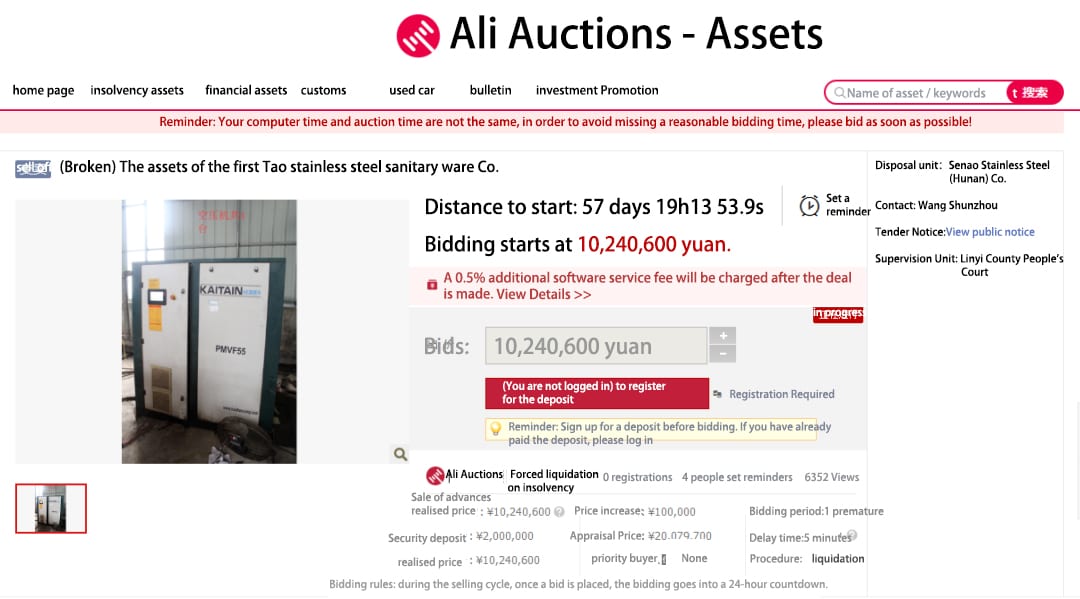 In addition, the auction assets of Taizhou Huangma Sanitary Ware Co., Ltd. is located in Taizhou City, Luqiao District, Pengjie Town, Tang Wang Village, plant and land use rights, the starting price of 16.33 million yuan. Ltd. was established in 2006, with a registered capital of RMB 6.8 million. According to the Supreme People’s Court, Taizhou Huangma Sanitary Ware Co., Ltd. has three records of loss of trust, the latest of which was published on July 7, 2020. This announcement shows that the company was fined RMB 215,680 yuan, all of which had not been fulfilled as of the announcement date. 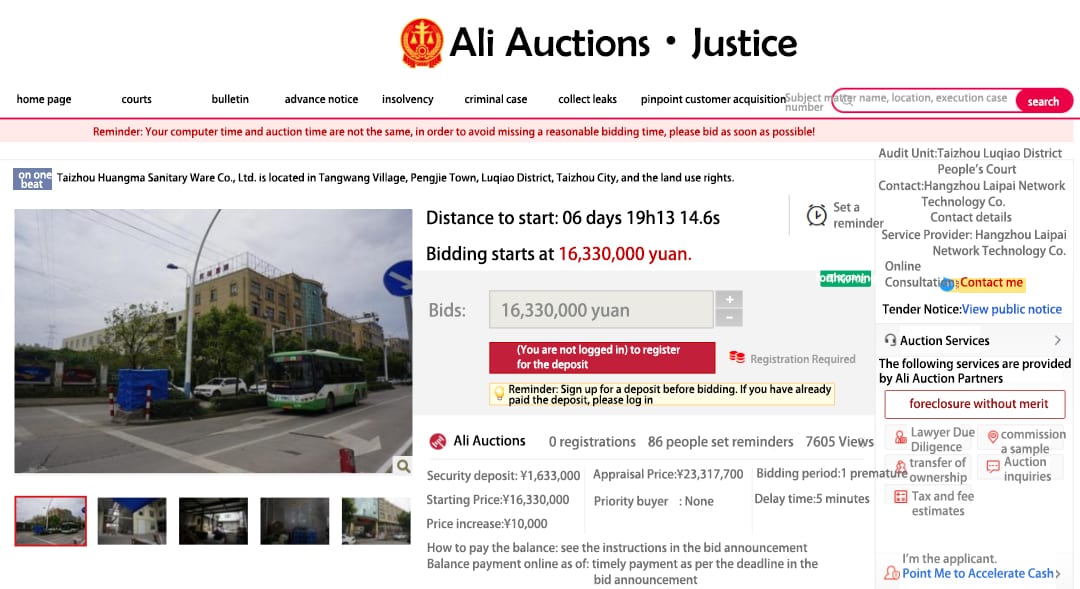 More Involved In The Bathroom Enterprise Debt Was Auctioned 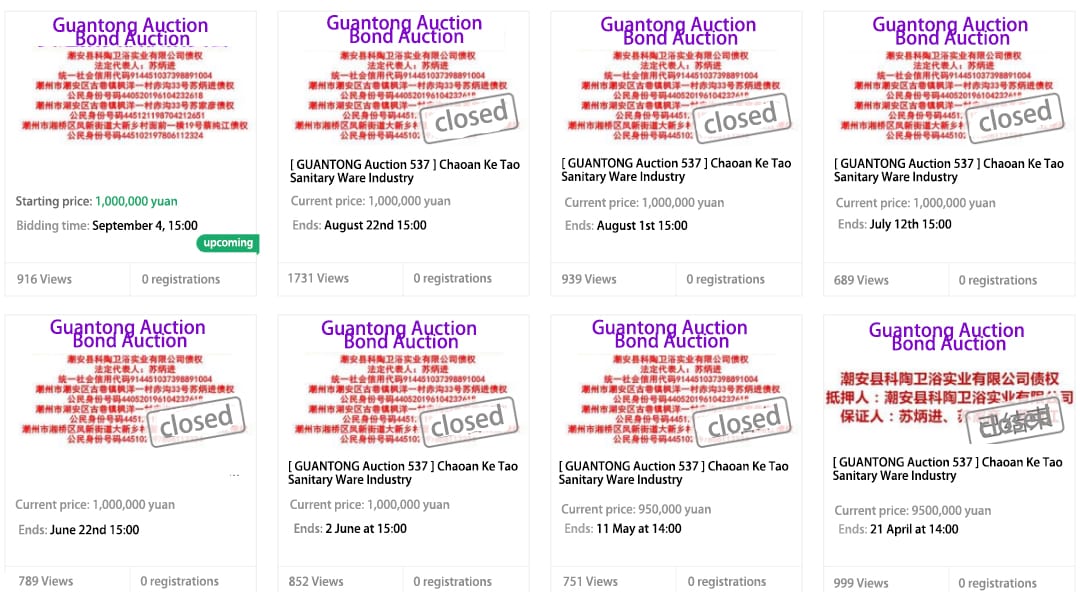 In the rest of the debt auctions involving sanitary ware companies, most of the sanitary ware companies are debtor status, and there are companies with debts of more than 100 million yuan. For example, in the Industrial Asset Management Co., Ltd. released a titled “Industrial Asset Management of Fujian Oulian Sanitary Ware Co., Ltd. and other 17 non-performing credit disposal and investment announcement,” the announcement shows that, as of February 29, 2020, involving Fujian Oulian Sanitary Ware Co. At present, the auction is still in the investment.

So Far This Year, More Than 6 Sanitary Ware Enterprises Filed For Bankruptcy Liquidation

With the concept of housing and changes in consumer demand, the bathroom industry in recent years into a period of deep adjustment, enterprises in the management and operation of a series of new challenges. Under the changes, some companies have found their way forward, while others have filed for bankruptcy due to insolvency. 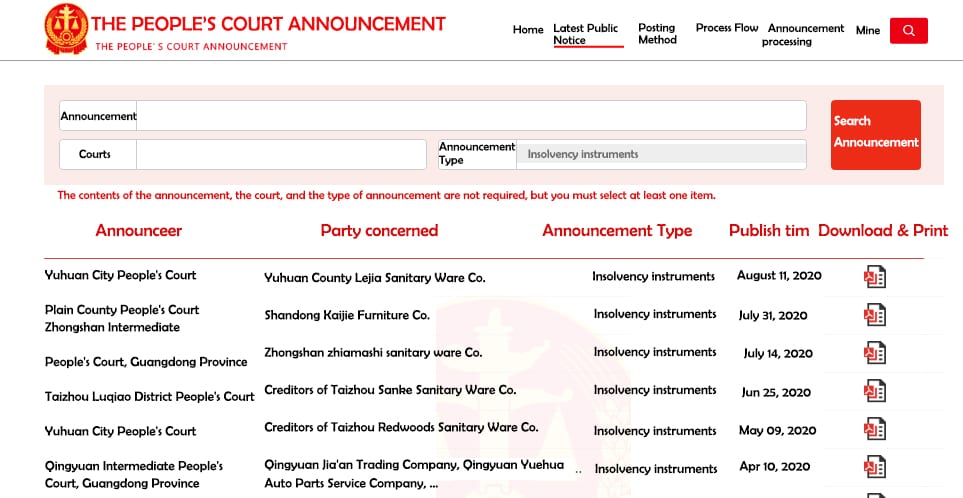 Bankrupt sanitary ware enterprises are mostly due to the capital chain breaks, unable to repay loans, some enterprises are also alleged to default on workers’ wages. Such as Zhongshan Hermes Sanitary Ware Co., Ltd. previously appeared in 2020 in Guangdong Province, the second batch of default on wages of migrant workers in the list of enterprises, the company owes 124 workers 977,000 yuan in wages are included in the “black list”.

It can be predicted that, in the industry’s internal self-adjustment and external force majeure, the bathroom industry will face a new round of reshuffle, the overall strength of the poor, the pressure of the capital chain, the ability to resist the weak enterprise will be eliminated by the market, can stay, are able to withstand the test of the market enterprise.